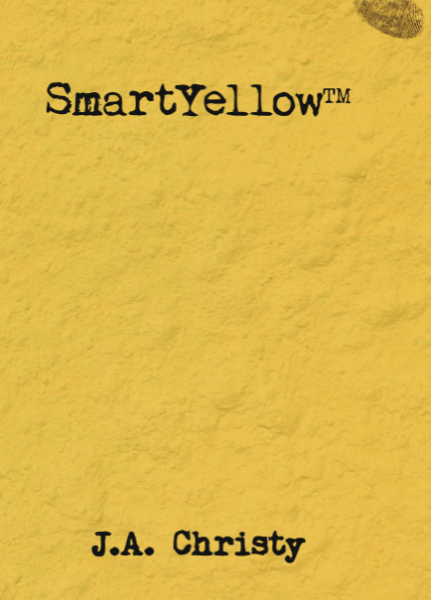 This week’s indie debut is SmartYellowTM by J.A. Christy, published by Elsewhen Press. This speculative novel feels all too real and made me contemplate once again about how our society judges and segregates people, but perhaps most scarily of all how easily we could all end up like the main character, Katrina, does when her life takes an unexpected turn.

Most people think of speculative fiction as being a future that could happen but SmartYellow for me is very close to a present that we are already living in. Can you tell us what inspired this story and when you started writing it?
I was inspired initially by a TV program starring Steve Coogan and Rob Brydon, just by one line that mentioned living and surviving. I live in Manchester and there had been rioting on the streets while I was writing SmartYellow in 2011 and it made me think how some people were not really living a life, for various reasons, and were just surviving. I’ve always been interested in thought experiments such as Schrodinger’s Cat and the question of decoherence in physics, and these both appear in SmartYellow in unexpected ways.

In terms of speculative fiction, I think SmartYellow is only perhaps one step removed from the world we live in today. There are elements of science fiction in the smart technology and and a speculative take on social order, but it wouldn’t take too much imagination to work out how close the residents of Hill Farm are to people who, in real life, find themselves with very few options in life. The novel takes this another step towards an Orwellian world of social control.

The main character Katrina is well educated, smart and comes from a relatively well-off background but has ended up in a ghetto – how do you feel that at the time your novel is coming out there are similar situations happening all over the UK due to serious housing issues, austerity measures and media-engendered fear and animosity towards people that actually need help rather than condemnation?
Thank you for asking this question because it gets right down to the premise of the novel. Kat suffers because she has unintentionally strayed from the prescribed path her parents chose for her, finding herself on a tough social housing estate with people she is afraid of. Initially it seems like the people she is living around are not helping themselves, but as the story progresses Kat realises that there are complex issues at play and the residents of Hill Farm are not all there voluntarily but are marked out by their ‘social status’ – and this is irreversible.

A smaller role is played by two academics who, initially with good intentions, design a program to help those who are deemed ‘problem cases’, but this is passed to a right wing government and twisted into a tool to dominate the very people the academics were trying to help.

I feel very strongly about social justice and I hope that SmartYellow provides an only slightly speculative metaphor for the reality for people who, for whatever reason, find themselves forced into poverty so that they can only just survive. Kat’s journey mirrors the journey of many people in Britain today, and her gradual realisation that the people she fears are in turn afraid leads her to the key to what is actually happening not only on Hill Farm, but all over the UK. In SmartYellow world, of course – or is it?

The situation in the UK has worsened since I began to write SmartYellow with more political movement towards austerity and the consequent suffering. I can’t help but think that some of the hard-hitting measures, presented as cruel-to-be-kind social programs to improve lives, simply do not take into account the vicious circle of complex social problems people find themselves in, through no fault of their own and with no way out.

Which writers have influenced your work?
My work is heavily influenced by Margaret Atwood and Scarlett Thomas. I read across many genres and have taken elements from crime as well as speculative fiction for SmartYellow. I enjoyed Jeff Noon’s novels very much, and his gritty urban style, along with many novels with a hard crime edge. There is a definite speculative strand running through my reading, starting with Alan Garner’s Weirdstone of Brisingamen through Tolkien, Terry Pratchet and Neil Gaiman and many other authors in between.

What are you reading now?
I’ve just read Station Eleven by Emily St John Mandel, which I thought was excellent, and I’m currently reading All My Puny Sorrows by Miriam Teows and I’m enjoying it very much as well as Scarlet Thomas’ The Seed Collectors.

What are you working on now?
I’ve just finished a crime novel, which I am now working on with my agent, and I’m about to start a second speculative fiction novel, a follow up to SmartYellow. I’m also working on developing a crime story screenplay as I recently completed screenwriting training.

Thanks to Jacqui for telling us about her way into this story. It really is a great read and very excited to hear there will be a follow-up! It’s been released as an ebook this month and the paperback comes out in November 2015. You can connect with Jacqui on Twitter to keep up-to-date with more of her writing news.

Tell us below what you think of the ideas raised in the novel and how you think they reflect the world we’re already living in; and which other good speculative novels you’ve read lately.

And keep an eye out for the next book in the indie debuts series – Alcina Faraday’s Beauty, Love and Justice. The author interview will be on the blog next week.

Year of Indie Debuts: How You See Me