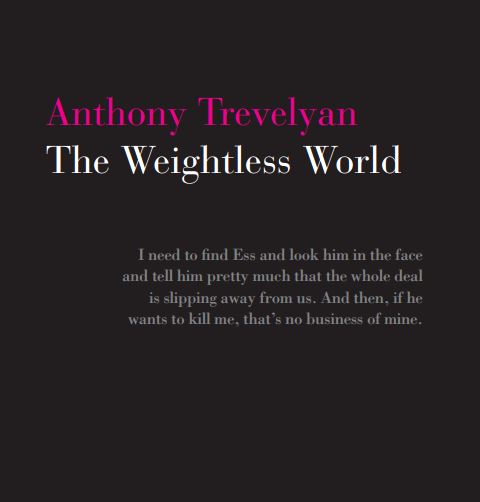 Delighted to welcome Anthony Trevelyan onto the blog today for the Year of Indie Debuts series. His novel, The Weightless World, was published by Galley Beggar Press earlier this year. It came highly recommended to me from lots of people when I put a call out on Twitter for some new author recommendations, and I can see why. It’s the story of two men on a mission in India to purchase an anti-gravity machine, if they can just find it again.

Anthony, the theme of the feeling of weightlessness applies to more than the anti-gravity machine your characters are chasing and reflects what is happening in their careers and personal lives too and, for me, also the modern world we’re living in and how we are all more connected than ever before but at the same time completely disconnected from nature and the majority of our fellow human beings. Were these conscious themes that you were writing into the book or did they appear to you after?

When I started writing the book, I had some general ideas about how weightlessness could work on more than one level, but a lot of it came as I was working through the drafts and discovering how weightlessness was a factor in the life of each of the characters.

Part of it came from my memory of being in my twenties. I know an awful lot of people do amazing and inspiring stuff during that period, but I really didn’t. I wrote the book at the end of my thirties, looking back on myself at the end of my twenties, and weightlessness pervades my sense of myself at that time: being detached from life, belonging neither to the world of childhood nor the masquerade of an adult existence I felt I was putting on… Personally, I couldn’t be happier to be in my forties, and have all that behind me.

What inspired you to write this story and whose work would you say has influenced you as a writer?

I suppose the book’s main inspiration was – in a word – work. As I mentioned, I was thinking about myself in my twenties, and the most important thing in my life then was work. As I imagine is the case with many people, after university I had to move to another part of the country to find a job, which meant I was separated from family and friends and the only people I saw on a regular basis were colleagues. In the book I explore how work relationships in a situation like that can get, well, pretty intense.

The writer I love best is Saul Bellow, though I’m not sure he stands out as an influence on this particular book. In a completely perverse way, I see in it more of JM Coetzee’s later, jollier stuff, which I was reading at the time, and which is concerned entirely with old age.

This is your debut novel but is it the first one you have ever written?

No. The Weightless World is the fifth novel I wrote properly. As I teenager I wrote a ton of novels improperly – one draft then you reckon it’s good to go – but there were four others before this one that I wrote and rewrote pretty painstakingly, devoting a period of years to each.

I had a couple of near misses. The first book I wrote got some encouraging feedback, and the second secured me an agent for a while, though didn’t find a publisher. Fortunately I now have an amazing agent, Emma Herdman at Curtis Brown, who fought valiantly to find The Weightless World a publisher.

Looking back, I’m quietly relieved that my first two books were never published – I’m not sure I’d want to stand by them now. But the two after that I’m still quietly proud of, and I would be pleased to see something happen with them eventually.

Why did you choose to go with indie publisher, Galley Beggar Press, and how has the experience of being published by them been?

It’s been a fantastic experience. When Emma first told me that Galley Beggars might be interested in the book, I was delighted, though nervous. After all, these are the guys who publish Eimear McBride and Paul Ewen – bona fide literary superstars. And they still release only two new titles a year. How likely was it that they would take my novel? But after a nail-biting couple of days Emma called again to say Galley Beggars had made an offer on the book, and I was absolutely frenzied with excitement.

Since then the directors of Galley Beggars, Sam Jordison and Eloise Millar, have given me a huge amount of support and attention, from meticulous editorial through the production of a gorgeous edition to swanky launch parties in London and Manchester. With an indie like Galley Beggars, I’ve found, passion is everything. I’m immensely grateful and couldn’t have asked for better publishers.

I’m writing a new novel, though it’s still at that early stage when a puff of the wrong sort of air could snuff it out entirely. It’s odd to think I am finally writing a second novel. Over about ten years, I wrote five first novels. Now, for the first time, whatever I write next is at least a second book: something that builds on, reacts to, or in some other way addresses the fact I already have a first novel in the world. I find that weirdly interesting, and I’m already seeing ways in which the new book is entering into conversation with the first.

In some ways, then, I’m looking more deeply, or with a different perspective, into things I found interesting while I was writing The Weightless World: the effects of technology, the experience of the contemporary, the queasy sense that it’s all a con or scam.

Thanks so much for coming along, Anthony. I love that final line there and I often find myself pondering on the reality, or unreality, of things and if you stop to think you can see how surreal (mad?) the world we’re living in really is. Whatever comes next from you, I look forward to reading more of your work.

You can get a copy of The Weightless World here and connect with Anthony on Twitter to find out more about his writing.

Next week, Dean Lilleyman is here talking about his novel, Billy and the Devil.

Year of Indie Debuts: Billy and the Devil