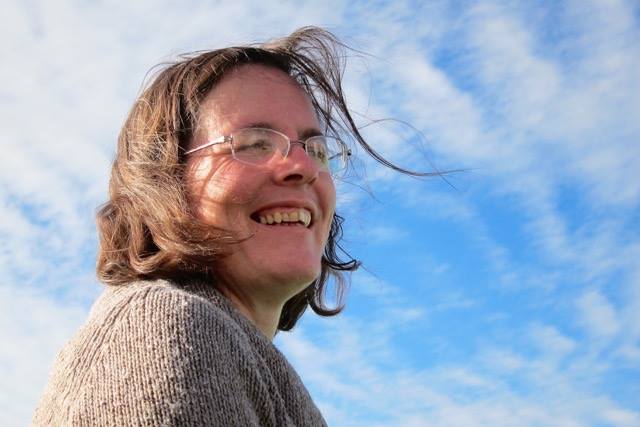 A big welcome today to Virginia Moffatt, who sent in her work regularly for the competitions and I’ve enjoyed reading it very much. So I was thrilled for her when Echo Hall got picked up by Unbound; and curious to find out more about her and her writing…

I am hugely grateful to Amanda for allowing me the space for a guest blog about my novel Echo Hall. Although I think our books sound very different, they do share a common idea – telling the stories of three generations of women, and I can’t wait to read As If I Were A River. I hope to return the favour soon with a guest blog from Amanda, but in the meantime, here’s the story of my novel and how you can help get it published.

In 2003, after fifteen years working in social care, I took a career break, when my husband was appointed as Director of a small charity that works for peace – the Fellowship of Reconciliation. The new job came with a tiny flat above the retreat centre they ran at the time: a converted school house with an extension that had included office space, a guest’s sitting room and six bedrooms. Situated next to a graveyard, on the edge of a tiny hamlet, surrounded by fields and in sight of Molesworth air base (home of the US’s Middle East intelligence hub, the Joint Analysis Centre), it was a far cry from our previous homes in Southend and London. And after nearly five years of juggling work with managing family life and childcare, it was strange to be without a paid job for the first time in my adult life.

For most of the two years we lived there, I was very isolated: a leftie pacifist living in a right wing pro-military community; a townie in a rural community made up of families who’d lived there for generations; it took a while to find like minded people to talk to. But it did give me space to think, and think I did. I had always wanted to be a writer, and never quite found the time. Now my frantically busy life had slowed down it occurred to me if I didn’t seize the opportunity to start writing, perhaps I never would. I also realised that without the intellectual demands of my job, I had room to let my imagination flow, and soon my new situation provided plenty of creative fodder.

Old buildings creak at night time, and our new home was no exception. Living in the country also means getting used to blanketing darkness at night, and closing the curtains on shadowy fields filled me with unease at bedtime. It was worse when my husband, Chris was away, which he frequently was, and often imagined I could hear voices at night time. Of course, I laughed at myself in the warmth of daylight, but gradually I began to wonder, what if they were real? Whose voices were they? What would they be saying? And ‘Echo Hall’ was born.

If you’d told me then, that I would be writing the novel for the next ten years, I think I might have given up on the spot. But back in 2004, all I could think about was my story and how to bring it into being. It wasn’t easy – the demands of looking after three small children meant I had no time during the day to write, and by the evening I was too exhausted. But, over the next three years, I developed the idea from that initial thought about ghosts into a story about intergenerational conflict set against the backdrop of war. By 2007, we had moved to Oxford, my youngest was at nursery and I was back working in a part time job. However, I began to find little pockets of time to start writing the story, and at last the novel began to shape.

It would still take me another seven years to complete though, as I had to balance writing with work, family life and a two year writing course. I would have periods of intense activity when I had the energy to get up early and write late into the evening. Occasionally, I got away on retreat making leaps and bounds in the manuscript. But at other times, personal life (bereavements, stress at work) blocked me, big work projects crowded my brain, or the children’s schedule was so manic I had no room for anything else, and my progress faltered.

Still the story continued to possess me, and I kept at it. By 2014, ‘Echo Hall’ was ready to be sent out into the world and I began to submit. Like most writers, this period was a huge rollercoaster, there were blank rejections, emails never answered interspersed with hopeful calls for full manuscript, positive feedback concluding it wasn’t quite for them. After eighteen months, I was beginning to despair when I had a huge boost last summer, as the book was longlisted for the Bridport Prize. At the same time, my second novel, ‘The Wave’ was shortlisted on this website for the Retreat West Opening Chapter competition. Both of which gave me confidence to submit ‘Echo Hall’ for the December round where it was also longlisted. After months of getting nowhere, these boosts were very much needed, and I am so grateful to Amanda for championing my work in this way.

And in January, I received the news I’d been longing to hear, when I was signed by Scott Pack of Unbound. Unbound is a relatively new and unusual publisher. Formed in 2011 by three writers – Dan Kieran, Justin Pollard and John Mitchinson – it produces books by crowdfunding, inviting readers to get involved. The company is both a funding platform and a publisher, offering authors 50:50 royalties once the book achieves its target.

I’m delighted to have been signed by Unbound, because I love the idea of working with readers to make the book happen. I’ve kept going with ‘Echo Hall’ for all these years because I really believe in my novel and am excited about finally getting it out into the world.

Set against the backdrop of three wars – the 1991 Gulf War, World War 2 and World War 1 – the novel follows the fortunes of three women who become involved with the Flint family, the owners of Echo Hall. The book concerns the impact of unresolved conflict within families and nations, which asks does history always have to repeat itself, or can we find another way? I have peopled it with characters who go to war, characters who don’t and I hope, as well as being a gripping yarn it will make readers think about the questions I’m raising. Although it is set in the past, it is very much a book of the present as the origin of today’s wars in the Middle East can be traced right back to World War 1.

If you are interested in backing this book, it is easy. All you have to do is sign up to Unbound and pledge here. (But be warned there are some great titles on there, pledging can be a bit addictive!)

If you are a writer, interested in pitching to Unbound, that too is easy. Just send your details to them!

Thank you and good luck!

Thanks so much Virginia for this lovely blog and your kind words. I for one can’t wait to read Echo Hall and have made my pledge.

Competition: Win a place at the Short Story Retreat

From novice to novelist by Christmas