The Perfect Word by Bev Morris 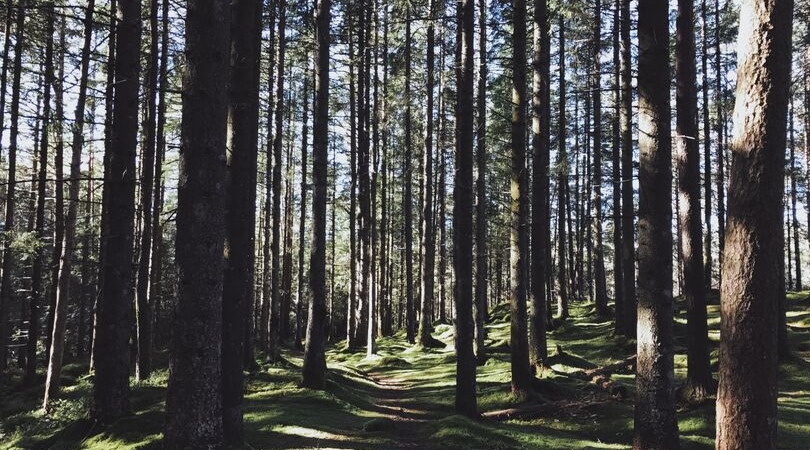 It was the day of the perfect word: psithurism.

Go on, say it out loud. Hmm, doesn’t that sound glorious? And how does it feel in your mouth? Soft, slight and almost not there? Such a pleasure to say, don’t you think?

I can’t take all the credit. The autumnal weather and strange light of the ebbing season made me more restless than usual. You know, the kind of day where even your skin doesn’t quite fit. I headed out to Taf Fechan Forest, taking the rain as a sign of the cleansing to come. Crunching through the yellowing leaf debris on the sodden ground, I listened as the trees lifted their voices to sing to me, their sighing whispers bringing ghosts of seasons past to caress my cheek. Their language ancient and urgent, telling me a secret. Telling me the final word to offer up to her.

Taking out my phone I photographed my hand against the bark of a grey willow tree and sent the image to her together with the word. Like every day since we’d met, she was waiting for my message. Don’t you love it when you know someone is that hungry for you? The message was read instantly, the acknowledgement simple: ‘Yes’. I had found a word that sated her desire and I would be rewarded.

The first file arrived and was a stark silver-tone photograph. I could see our poem etched on her skin, starting at her belly button and curving outwards:

The alliteration had been our initial conceit, the thing that had drawn us together in the chat room. Intelligence is sexy, don’t you think? Engage the mind and the genitals will follow. The poem spooled out: word by word, line by line, stanza by stanza, blooming like a dog rose in untended hedgerow. I swallowed hard at the anticipation of seeing the final word in the promised place and pressed my back against the tree, letting the rain drip from its branches onto my face, while I waited.

Then the film downloaded and I shuddered at the beauty of what we’d created.

Each ripple of our passion played out on her flesh for our world premiere. We didn’t need a red carpet, did we? The audience was all around us. I read the poem on the breeze rustling through the faltering canopy: every syllable and comma lifting off her body as she turned and swayed in front of the camera. Her face, her name, still a mystery to me but her soul was mine and the poem was the prison we had crafted for her. As the last word edged through my lips and she reached her hand towards the lens, I knew I had lost everything to the whisper of the wind.

About the author: Bev’s short stories have been published in literary anthologies and women’s magazines and she was a finalist in the Write Here Write Now 2019 playwriting competition. Her poetry has appeared in the last three Beautiful Dragons Collaborations and was part of a community project on buses in Harlow. A short collection of her poetry is due to be published Rugged Rocks Running Rascals in October exploring a relationship with a soldier. Alongside creative fiction, Bev supervises academic writers and has written for academic journals and conferences (SCUTREA, BERA, The Skills Journal). Bev also coaches other creative writers to ‘get that darned thing written’ and to experiment with multi-media approaches. She is currently ghost writing a special forces autobiography, editing the second draft of her feminist dystopian novel and trying to invent time travel as there just aren’t enough hours in the day.

If you’ve enjoyed Nicola’s story, please leave a comment below letting her know!