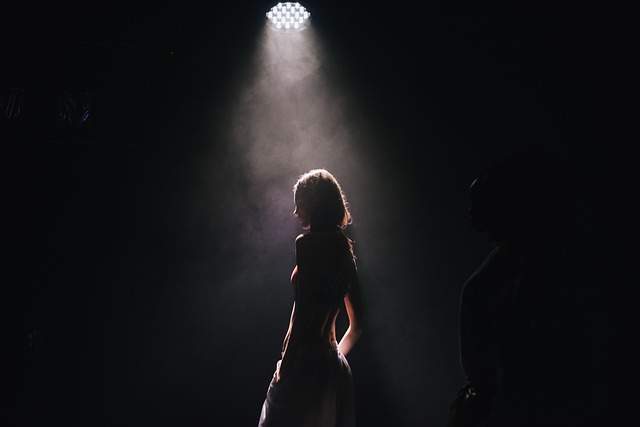 I’m at the theatre. He thinks I’m at home, but I’m here, wearing the dress he likes. I texted him an hour ago: break a leg, darling.

There’s a hush, and the curtains part. An empty stage, and then there he is: my husband, but he belongs to someone else tonight. Even though I know the lights hide me from him, I shrink into my seat.

And then she comes on stage. White dress, off-the-shoulder. Smaller than I expected. Beautiful.

I came because I had to see. At night, in bed, he recites his lines, and I fall asleep wondering if he does the same when he’s in bed with her.

“The opening scene shows the first time Ted and Sylvia meet,” he said.

“Is it love at first sight?”

“She bites his cheek. Draws blood.”

“What? Have I ever wanted to bite someone?”

“Not someone,” he said. “Have you ever wanted to bite me?”

And now the theatre is hot. I want to say to the man on my right, “That’s my husband.”

On the stage, they’re both spotlit, moving towards one another, spinning. It’s a scene he was unsure of. He thinks it looks stupid. But the director is experimental.

I watch as she spins. Her hair is longer than mine. I imagine myself at home, spinning in front of the mirror, naked, trying to see my own chaos.

He’s surprisingly graceful. She’s taught him that move dancers do when they twist around, where their head seems a little behind their body, and then it quickens at a point in each turn to catch up with the body’s spin.

And now they collide. Their spotlights join in an intense brightness. The director was right: it’s incredibly effective.

They don’t kiss, but their hands are on each other. An intense embrace, and then she pulls his head down by the hair, drags it to the side.

She bites his cheek.

There’s a gasp from the audience, and he pulls back, covering his face. When he takes his hands away there is blood on them, and he rubs them down her dress, over her breasts.

She throws her head back and her laugh breaks the silence.

The spotlight cuts out, and I’m standing, fists clenched.

The man to my right is looking at me. I want to say, “I know how it’s done. A blood bag in his hand. She didn’t bite him.”

I want to say, “He’s sleeping with her.”

A single spot: Sylvia – her real name is Catherine – alone at a writing desk.

And only now do I see what I can do. I ask the man to my right if I can get past and I walk into the aisle, then straight up to the stage. I put both hands on its lip, take a breath, and then I push myself up.

About the author: Jason Jackson’s prize-winning writing has been published extensively online and in print. In 2018 Jason won the Writers Bureau competition, came second (for the second year running) in the Exeter Short Story competition, was runner-up in the Frome Short Story competition and had work shortlisted at the Leicester Writes competition. His work has also appeared this year at New Flash Fiction Review, Craft and Fictive Dream. In 2017 he was nominated for the Pushcart Prize. Jason regularly tweets @jj_fiction

If you’d like to see your story featured on the website, you can get info on all the themed flash competitions here.