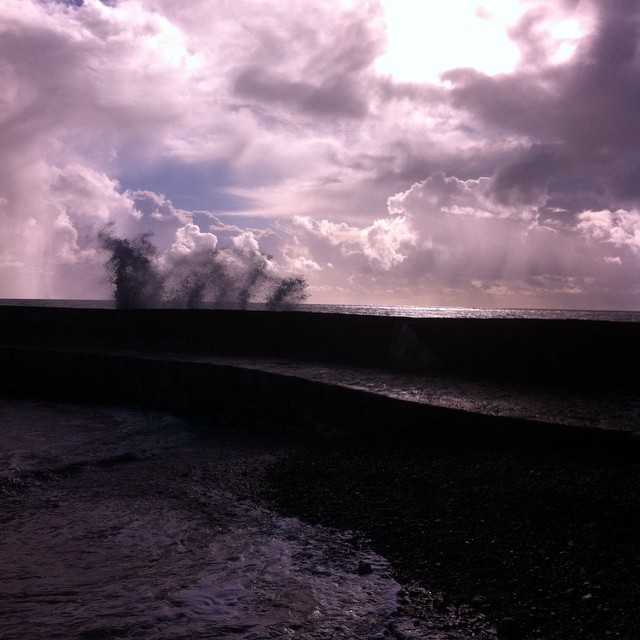 It wasn’t really great weather for the beach, but I should have known it would lash today. God walks towards me, for all the world looking like a mobster. Shit. I lean against the sea rail, spray pisses up my back. How has it come to this? On the last day, I am the last man standing.

They always said it was godforsaken, this grey stretch of coast with its arse-end towns. Sent all the junkies and screwed up kids from the city. Bussed them out by the hundred. Easy to forget down here. ‘Wonderland’ it said on the front of the buses.

That’s how it started, pushing the problems far from the city. Let the city gleam again. Put the cameras up. Big all seeing eyes, stretching out on metal beams. Pick out the problem faces. Choose. Reach out. Remove.

The news hounds cheered us on, you should have seen the headlines. Grannies could sleep in their beds at night, yummy mummies could let their little ones play in the street while they slept off their vodka prozacs of an afternoon, and bankers didn’t have to step over beggars on their way into Costa.

The votes rolled in at election time. No one predicted it, except the poets who looked up in the indigo sky to the dark birds of history. We took the Parliament in a landslide, the Union followed, then all the United Nations. We had the technology. We had the scale. Let’s bleach the country, the Continent. Hell, why not? The planet. Keep pushing the problems out.

Got the branding in place-black on red-classic. We went global. That’s when we had to think about efficiency. Bussing out the no-names wouldn’t work. Omniscient logistics were requisite. It had to be epic. We were the gods now.

Push the bodies in the pits, scatter the earth. Burn.

I wore a suit like his, sharp, when I mapped the migrations, traced the burn lines. We were all slick, fifty floors up in the sky in our shard offices, watching the distant dark plumes. Not a speck on my threads, I was always proud of that.

I was the cartographer of the cleansing.

Shit, his shoes gleam. He approaches. The last judgement, here in the rain, at the end of the strand.