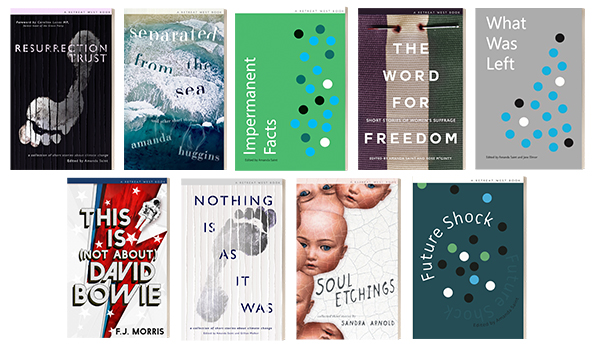 It’s been seven years since Amanda started Retreat West and two years since she began Retreat West Books. In that time more than fifty authors have seen their work published on our website and more than one hundred and twenty in print. That’s an amazing feat(!) and it’s equally rewarding to see each submission process attract a more thrilling selection of writing.

So, since it’s our birthday, and we’re always looking for opportunities to shout about the brilliant authors we’ve published, we thought it only fitting that we use the occasion to shout-out about just a few of the authors and stories published so far.

Amanda’s writing is immersive. Sentences are concise and yet communicate so much detail it can take a moment for your brain to catch up. Whether it’s an observation of a refurbished hotel already curling at the edges (eventually the salt air claims everything back) or the central character, Evie, using a bandages tin from her childhood to keep spare money, every detail in Enough reveals something about Evie, and so we feel we are viewing a complete life.

As someone who sent off for a pair of ‘X-Ray specs’ as a child (and waited for the postman every day until they came) an ejector-booted adventure holds great appeal. A clever use of repetition establishes the central character, Connor, setting the journey off with a pow! And then it progresses so quickly it leaves you breathless. It’s an incredibly touching story and I reread it immediately to appreciate the craft of its storytelling.

When Mickey Met Minnie takes us on a Tinder date at Purity, a new age eco restaurant where the waiters choose the food for its patrons. It’s both hilarious and filled with infectious joy, as we see the contrast between two drastically different characters of whom I would happily spend an entire novel in the company of.

Sandra’s writing is humorous, strange, poetic and often dark. This one reminds me a little of the writings of Shirley Jackson and gripped me from the start as a jealous house grows increasingly possessive of its owner’s attention. What struck me about this story, is the ease and speed in which it brings you into the fantasy and then like a whirlwind, carries you along, putting you right there in the house, instilling you with a sense of claustrophobia.

Angela’s story plays with expectation masterfully, dropping glaring warning signs that has the reader shouting at the page while frantically reading on. The recently widowed protagonist embarks on a new love affair and we spend the story waiting for the impending doom as she carries out the sale of the family business and makes plans to emigrate to America with her unlikely lover. To say any more would be to spoil the fun but there is plenty to be had in this engrossing caper.

I’ve heard Freya’s writing described as being like popping candy in your mouth. It’s visceral and like Bowie himself, unique and authentic. Bunbury Snow Days captures the poetry, strangeness and longing that Freya uses as her building blocks. Seek her writing out for its unique voice.

The story begins by presenting the reader with a mystery. What secret is the narrator (Hannah) keeping from her friends, husband and children? As Hannah makes plans to carry out her secret mission, the story builds suspense, revealing a major event in her life matter-of-factly but with great impact. Then as we finally uncover the mystery, it takes a delicious turn and you’re left with one of my favourite feelings as a reader: wow, how did they do that?

Thirst is a story of desperation and what you will and won’t do to protect your family. All too familiar struggles are presented, such as dealing with an unsympathetic official, following rules designed to make sure the people most in need of help can’t get it, neighbours abandoning homes, people chasing rumours of work almost as hungrily as they’re chasing the rain and refugees lost in their own land. It’s alarming and compelling story.

Two things in particular stand out about this story of a schoolgirl studying Abraham Lincoln. The first is how expertly each snippet of information about Lincoln reveals something about the central character, whether about her life or the world she inhabits. The second is how the story slowly reveals information about her family situation. We learn she’s taking care of ‘little ones’ before discovering they are her step-sisters, and she likes her stepfather but there are hints that he’s not the perfect father figure. Great storytelling!

Did you enjoy our journey through some of our published works to date? If so, check out the full stories and support an independent publisher. And please share this on social media, if we sell some books, we’d love to turn this blog into a series and get the opportunity to talk even more about our brilliant writers and their work!