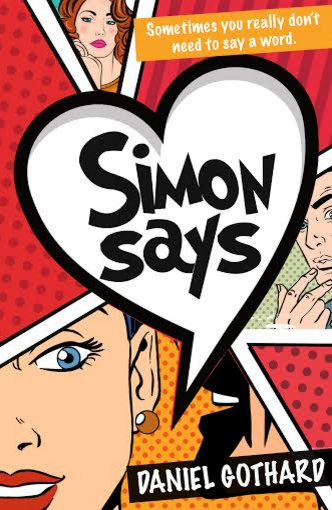 Fellow Urbane author, Daniel Gothard, has just had his third novel published. Simon Says is a funny, bittersweet tale of a man trying to get over his engagement ending and find a new way to be happy in the world. Daniel has kindly written a guest blog all about love and laughter and giving his hapless hero the same name as the super suave fictional character, Simon Templar, aka The Saint…

Romance and comedy are not the most obvious bedfellows and thousands of films and books have been created using only one of the genres. But I believe, when the mix is right, the symbiosis can summon up a sense of the most entertaining and life-affirming moments we can experience.

Shakespeare is perhaps the starting point for most literary criticism in terms of genre, plot device, characterisation, etc, and he knew the value of romantic comedy; the desire within an audience to follow the travails of his characters and their misunderstandings, misfortunes and resolutions – laughing, crying and feeling for them – until the happy ending.

“Much Ado About Nothing” springs to mind as a classic romantic comedy – it perfectly utilises the cliches of men being Men and women being Women, while slowly undermining the facade of gender roles and embracing the frailty of basic humanity and love.

The world of film has made hundreds of millions of dollars from romantic comedy, from the intelligent ‘talky’ films such as “Annie Hall” and “When Harry Met Sally” through to the plain daft end of the spectrum with more puerile-based romance and comedy ‘classics’ including “There’s Something About Mary” (a film I love and would include in any Best Of list when thinking of the genre).

“When Harry Met Sally” and “Four Weddings and a Funeral” – for me – are two of the best romantic comedies ever made. Everything seems to have been constructed perfectly: locations, actors, music and – most importantly – the writing. Nora Ephron and Richard Curtis must have spent hours and hours perfecting each line, using every word to convey the characters’ emotions and their unique blend of humour, tragedy, near-misses, unrequited loves and the final payoffs. I have watched both films so many times, and I still marvel at the skill both writers employed so successfully.

Romantic comedy is an artform within writing, and it was deep love for the genre that led me to the decision to try and write my novel – “Simon Says“. I decided to give my central character a relatively well-known name – Simon Templar (the dashing hero in the novels of Leslie Charteris, the television shows and the 1997 Val Kilmer film). I wanted an immediate paradox, a character who, from birth, has been put in an impossible situation, by his thoughtless parents, of having those around him perceive an image – based purely on his name – formed from fiction: unattainable charm and glamour; the most heroic and witty of protagonists.

My Simon was always destined to be the complete opposite to the original Templar when faced with the rush and push of the difficulties in life, and yet he still manages to exist through his own fictions: the mental soundtrack he wishes he could connect with; the cultural reference points he clings to – with his best friend Sean – as a way of ameliorating the worst moments in his life. I confess, I did deliberately use some of the puerile humour I mentioned earlier: Simon, drunk and being chased for urinating on a tree, unable to zip himself up, flapping in the night breeze just made me laugh, so I put it in.

I hope I did a good job of mixing romance and comedy, it’s a grand tradition and I would love to think that someone, somewhere might read my book – perhaps laugh, cry, almost certainly cringe – and feel that incredible drive of the life-affirming and entertaining.

Many thanks, Daniel. I’m sure readers will laugh, cry and cringe at Simon’s story!

UK readers can win a paperback copy of Simon Says, just leave a comment telling us your favourite romantic comedy novel or film and a brief reason why you love it so much. Winners will be chosen by random number generator. Deadline for leaving comments is 9pm on Sunday 17th  January 2016. The winner will be announced here shortly after.

If you’d like to connect with Dan, you can read his work in After Nyne magazine and find him on Twitter. He’ll also be at Waterstones, Reading, on Feb 17th reading and signing books and all are welcome. You can get free tickets here.

2 thoughts on “Live, laugh and love”