Delighted to welcome Laura Laakso to the blog today as her debut novel, Fallible Justice, publishes. More delighted than usual as although it’s always great to have first time novelists featured on the blog, this novel was discovered by publisher, Louise Walters, through the Retreat West First Chapter Competition. You can read all about that here.

But today is all about the wonderful world that Laura has created for Fallible Justice. I was completely gripped by this atmospheric novel and I wouldn’t usually be remotely interested in a novel that features magic. But after reading the first chapter in the competition, I knew that this was going to be a novel worth looking out for. So, over to Laura.

World-building is a little bit like Marmite; writers either love it or hate it. Those who love it can have the habit of going overboard with details. A friend of mine used to write detailed treatises on the economics and politics of a world in which he set his Dungeons & Dragons campaign. We, the players, were expected to read them, but I don’t think any of us did. Why? Because the information was only interesting to its creator.

The above, I think, sums up perfectly world-building in novels, particularly in the sci-fi and fantasy genres, where the setting is not given. Every author has to find that balance between revealing enough to give the reader’s imagination wings and boring them to tears with the municipal facilities of a city the characters briefly visit. This is something I’ve been mindful of in recent years, given that my debut novel, Fallible Justice, begins a paranormal crime series Wilde Investigations.

Unlike Marmite, I love world-building. I could spend all day imagining different races and settings without ever getting bored. In fact, I’ve done just that on many occasions. But when it comes to my current novel series, I view world-building as part of the overall puzzle rather than a separate element. It’s a thread woven through the story instead of the scenery in the background.

When I began planning Fallible Justice, the original idea dictated the setting for the story. The plot hinged on otherworldly beings called the Heralds of Justice, who were capable of looking into a person’s soul to determine guilt or innocence, but also on modern technology. It made sense to settle for London, given that it is a city I know well. I never sat down to figure out the world as such, all the details grew organically from the plot. When I needed a group who were the keepers of peace and summoned the Heralds, it made sense to call them Paladins of Justice. I needed a degree of separation between the magical beings and humans, so the City of London borough became Old London, where the magic users live. The ruling class became Mages and my main character’s apprentice a Bird Shaman whom all pigeons adore.

The term magical realism seems like a contradiction, but I was always clear on wanting distinct consequences for the use of magic. It was also never going to be a solution to everything. Magic can’t heal a genetic illness any more than it can remove terminal cancer. The dead can’t be brought back to life. As enchanting as magic may be, the setting is rooted in the real world and no amount of power can replace antibiotics, mobile phones or public transport. There must also always be a cost associated with magic, both in terms of casting it and its consequences; the greatest example of this is the fact that the penalty for murder committed with the use of magic is death. And pushing your power to its limits means risking not just your magic reserves but your life.

Once I began writing Fallible Justice, I used one rule to guide my world-building: if it’s not relevant to the scene, don’t put it in. Thus I explained what Shamans were when the reader first meets Karrion the Bird Shaman, but the fact that Shamans can take animal companions didn’t come up until my main character, Yannia, met one such animal. The first chapter begins with Yannia channelling her power. In that way, the reader gets to experience what Yannia can do long before I give a name to what she is. But in that first chapter, I also began setting down Yannia’s limitations. She may have magic, but that doesn’t make her omnipotent. In fact, I believe she’s so relatable as a character because she’s deeply flawed.

As much fun as world-building can be, it must all be in service of the story. The story needs the world to provide context for the events and the characters’ actions, but the world is only relevant within the framework of the story. Striking a balance between the two means transporting the reader to the pages of the book and allowing them to live the story for themselves. 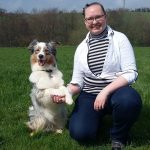 About the author: Laura is a Finn who has spent most of her adult life in England. She is currently living in Hertfordshire with a flatmate who knows too much and their three dogs. Books and storytelling have always been a big part of her life, be it in the form of writing fanfiction, running tabletop roleplaying games or, more recently, writing original fiction. When she is not writing, editing or plotting, she works as an accountant. With two degrees in archaeology, she possesses useful skills for disposing of or digging up bodies, and if her
internet search history is anything to go by, she is on several international watch lists. Her debut novel, Fallible Justice, will be published in November 2018 by Louise Walters Books and the sequel, Echo Murder, in June 2019. They are paranormal crime novels set in modern day London, but with magic, murder and general mayhem, and they begin the Wilde Investigations series.

You can keep up with Laura on the following social media pages:

And on her website: https://lauralaaksobooks.com/ and her author page on Goodreads.

The book is available in paperback and ebook from the following: