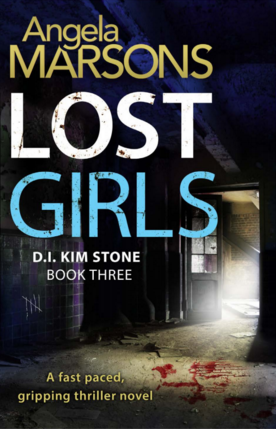 I’m thrilled to have Angela Marsons as a guest blogger today. Her story of success is truly inspirational and a must-read for all novelists whatever stage they are at with their writing and however many rejections they’ve had…

In January 2015 I was working 12 hour night shifts in a job that I hated. Fast forward to January 2016 and I have sold more than one million books, signed eleven foreign rights deals and in addition to my publishing contract with Bookouture for 8 books have signed with Bonnier Publishing for paperback rights on my first three Kim Stone novels.

I have to smile when I read of my ‘overnight’ success. It is a night that has lasted for twenty five years. In the publishing world I appear to have been born this year but I have been trying for a quarter of a century to share my work.

In that time I have started many books, finished some and abandoned others. I have worn a ridge on the shoulder of my postman from carrying the A4 brown envelopes of rejection. There were days I swear I could see the pity in his eyes as he dropped five or more such packages on my doormat in one go.

And the response from the publishers was always the same (if there was any response at all) which was ‘we like it but we just don’t love it’. It was a phrase that would haunt me for years. But I never stopped sending work out. Although the rejection was hard to bear, while there were submissions out in the world there was still hope. Once all of them were back I would dust myself down and send off a whole new batch.

In an act of defiance and after many years of trying to write the books I thought publishers would like, I decided to write a book just for me. I wrote Silent Scream about the character that had been in my head for years and set it in my local area of the Black Country. I expected to hit a brick wall at around 20,000 words but at least I would have known I’d tried.

It was at that point that the pencil took over and I simply couldn’t stop. I was getting up at five in the morning to write before I went to work and then straight back to it once I got home. Eventually in 2012 I secured a top London agent. I was delirious and thought my dreams were about to come true. Two years later we parted company, plunging me into the depths of despair. If this man couldn’t sell my work then no-one could. I’d had my chance and now it was over and I could barely look at a pencil never mind start a new book.

I had taken voluntary redundancy to give my writing a real opportunity and I had failed. I couldn’t find work and was rejected for a job as a warehouse operative at an Amazon fulfilment centre. My partner and I were selling our belongings to pay the mortgage. It was by far the darkest time of my life.

The next part is a bit like a fairytale.

From nowhere I received a call from an editor I’d worked with when I was with the London agency. She had also left the agency but had never forgotten about me or my character Kim Stone. Without my knowledge she had submitted Silent Scream to a small, young and dynamic digital imprint called Bookouture. I accepted this news very calmly as I was too scared to hope. I had just started a new job as a night supervisor in an alarm receiving centre and had to put all my energy into that.

A few days later I was contacted by Bookouture who said ‘they loved it’. I scoured the email for the inevitable words of ‘but not enough’. But they weren’t there. They simply loved it and wanted to sign me for four Kim Stone books. There were tears, lots of them and they weren’t small and dainty sniffles. They were big, fat, loud messy sobs.

To say that I could not believe it is a total understatement and even now some aspects of the last year have not yet found their way to my conscious mind. Silent Scream was published in February 2015 and within a few days of release hit the number one spot on Kindle and stayed there for a month. A week or so after that Bookouture asked me to sign with them for a further four books making eight in total and I couldn’t say yes quickly enough.

Subsequently Evil Games was published in May and Lost Girls was released in November and the first draft of book 4 has just been completed. Throughout last year I received interest from literary agents and publishers but I will be a Bookouture author for as long as they want me. Loyalty is very important to me and I will never forget that this small and driven team shared my passion for Kim Stone and her stories.

The lady responsible for sending in the manuscript is now my editor at Bookouture and we work closely together on every Kim Stone story. So, in a nutshell, that is my story and the advice I would offer to any aspiring author is this.

But, the single most important thing I can say to anyone is to just keep writing. And especially when things are tough and you feel there’s no hope, write some more. There is always hope and you simply never know what’s going to happen next.

Thanks so much, Angela. Really great to hear your story and know that things can turn around at any moment no matter how unlikely it seems that you’re going to get anywhere with your writing. So writers everywhere, take heed – keep on keeping on!

Tell us below how you keep motivated to just keep going and you could win a review of your short story (up to 2,500 words). The deadline for entering is 9pm on Sunday 24th January. The winner will be picked by random number generator and announced here on the 25th.

You can find out more about Angela on her website and connect with her on Twitter. All of the DI Stone novels to date can be found on Amazon.