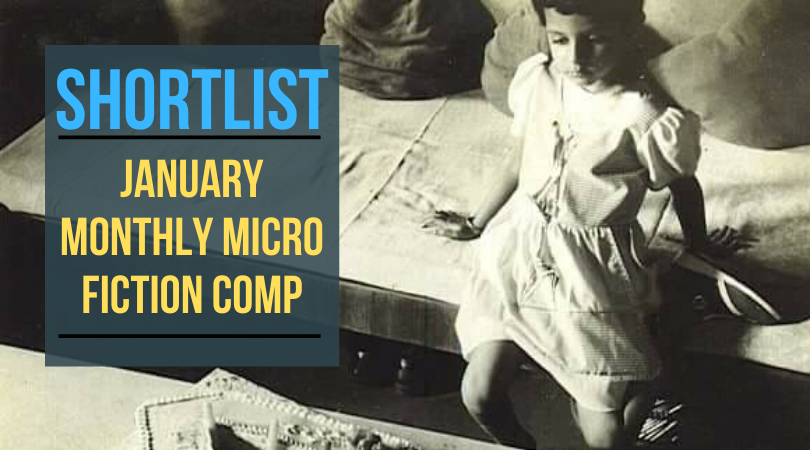 Well done to everyone who had a story on the longlist. We’ve had a few debates but the shortlist is finally decided upon! Congrats to all the writers whose stories appear below. Voting is anonymous though so please don’t tell anyone what your story is called.

Voting is now open until 23.59 on Monday 27th January. Winners will be announced on Tuesday 28th.

Enjoy these great micro fiction stories and then vote for your favourite in the poll at the end of the post.

Cake was an unheard of treat in the orphanage and so the anticipation of sweetness on tongues brought smiles to sad eyes. The candle wick released a hiss as the flame took hold, Lorna closed her eyes – and wished.

The damp grey melted and she opened her eyes to a beautiful forest clearing. Whispers of her mother’s voice curled about her until warm arms folded her into a perfumed embrace. Matching brown eyes shone as they danced, feet damp with dew, hair swirling free, their laughter breathless.

Under a soft lunar glow, a sleepy smile carved itself against salt-streaked cheeks.

Sylvie’s excited to be turning four – the doll she’s begged for, the cake with too much icing, the party games, the four candles to puff out with her delicate wisps of breath. To her, four means big school and pinafore dresses and pig-tails with bubble-gum bows.

In reality, an ever creeping shadow looms. Our subsuming is inevitable. The four allotted formative years end so They come.

The hopeless unknown shreds me daily – one choice too permanent to contemplate, the other to exist without my beating heart.

I’d prayed all night, lying in bed, staring at the ceiling, and the mosquitoes said Yes, Jesus and Mary said Yes, even God said Yes. I could eat the whole cake! Another surprise – a lovely dress, a pair of red leather shoes – the type we can’t afford – ever so special! I put them on straight away and waltzed into the kitchen. Mum said she couldn’t see anything, would I shut up. She was cooking all kinds of nothing, my stomach was rumbling and it was getting cold. Daddy, your shoes are under the bed. Nobody can see them except me.

She catches the sugar drops of his words on her tongue. They’re sweet and warm like an iced birthday cake. She swallows them. Always.

His glances are like silk and she doesn’t feel the barbs. His hands trace frosting trails in her skin, linger a pulse-beat at her throat.

Where are you going? What time will you be back? Who’ll be there?

His love hurts, but she thinks it’s better than no love at all.

She could almost take it. But their daughter is watching.

And when I am Queen, I shall build a castle of shell and stone, and I shall stand on the tower and scream into the sky scattering crows like arrows of my anger, and I shall sweep down the stairs with steel in my blood and send armies to meet you and their shields will blind you with the white heat of my fury and their swords will slice you like milk.

And you will say shhh, it’s okay, and stroke my hair. And I will let you wrap me in your smell and my castle will crumble like sand.

A snapshot, black and white. Each minute detail etched roughly into the back of my eyes. Is it real, this memory? My room, a stark prison cell. The cake, a peace offering from my familial warder. Icing slammed against the side of the cake. White sweetness against the black. The cake knife glints as it lies there, daring me to cut and slice. Wasn’t I lucky to have such a lovely cake made for me? That’s what everyone said. They didn’t see the butter being beaten to a smooth, submissive pulp. The hidden anger as the wooden spoon was wielded.

Mama tries not to come to conclusions about boys’ natural urges. Outside Gustav is rattling his pedal-driven go-kart against a bucket, while inside Phoebe sits alone in front of her 4th birthday cake. Round and round the wheels spin, kerthunk, kerthunk. Why? Mama would seriously like to know what besets the child, but she will not call him yet again. Instead she prepares to light a match.

“Mama,” Phoebe interrupts. “Can’t we wait for Papa to come back?”

Another crash. Mama places the matches beside the cake. She’s trying so hard not to
come to conclusions about boys’ natural urges.

“Not one lick of buttercream,” Mama warns. “The cake is for the party.”

Simi bites her tongue before it talks back.

Simi glares at the cake until her eyes water. She pokes it. Buttercream gives way, knuckle-deep, and Simi bores four even holes.

She pictures herself in the schoolyard, morning light sunbursting on the windowpanes, disappearing in a clatter of uniformed children. The safety in numbers.

Simi scoops up buttercream and takes a bite.

The Making of a Monster

After she told them about her vision on the beach, showed them the sculpture she had created, they kept her in a room. It was bare only for a simple bed and the sand she moulded into her prophesies. Once a week they allowed her to go to Mass. She was made to stand in front of Father Howard while he studied the reflection in her shiny black patent shoes and told her she was ‘holy’. One day she would squeeze the sand into an image of Father Howard and then she would pound it into obliteration with her fist.

When The Last Flame is Blown

My sons are sorting through my things. Kneeling, heads bowed, piles of photos dripping through their fingers.

‘Yes,’ I chuckle; ‘Me on my fourth Birthday! I was cross, your grandad had forgotten the candles.’

The boys nod and sigh.

The photo’s moved to the bottom of a pile, then absently shuffled like a deck of cards. We could play Poker or lay them face down like Tarots.

The shuffled pack is tossed into the binbag.

They don’t hear me; I’m the silent sudden chill that breathes goosepimples down their spines.

If you can’t see or use the voting panel below, you can cast your vote on this link: https://form.responster.com/46o3UJ