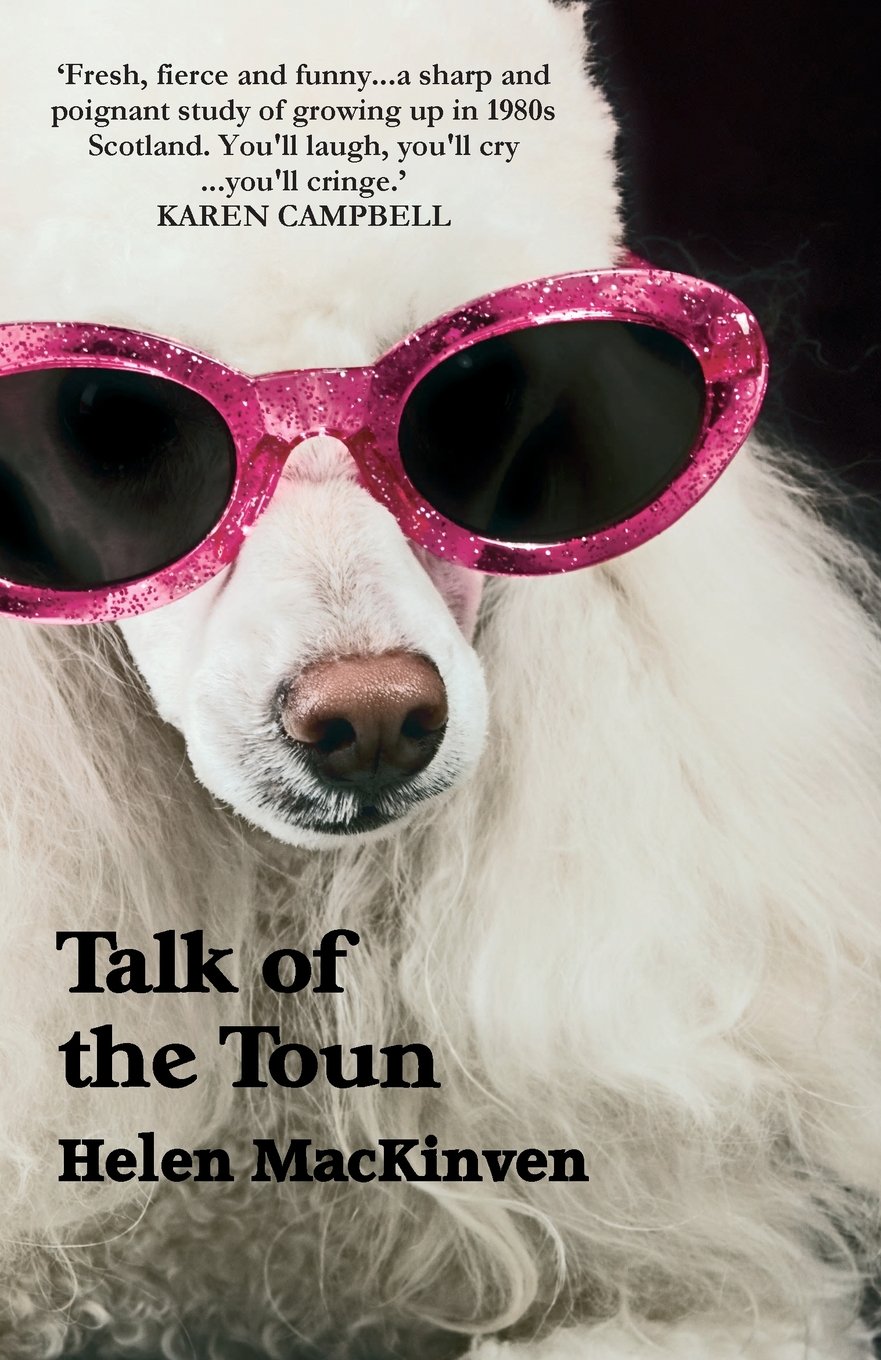 Thrilled to have Helen MacKinven here to kick off the series for 2016. Her debut novel, Talk of the Toun, was published by ThunderPoint Publishing last autumn and it is a funny, sad and insightful coming of age story set in the time I grew up so it really resonated with me. But even if you were not a teenager in the 1980s you’ll be able to relate to the timeless story of needing to find your way in a world where everyone tells you that there’s no chance of life being what you want so you just have to make the best of it.

Helen, you have created a fantastic character in Angela and really nailed the complexity of being a working class girl with aspirations to have a different life in 1980s Britain. How did this story start for you – did Angela appear as a character that wanted to tell this tale or did you want to explore these themes and found her through that process?

I come from a similar background as Angela and although I was always encouraged to “stick in” at school and I went on to be a trainee primary school teacher, I was very aware that this wasn’t the case for everyone I knew growing up. Out of a class of 18 pupils at primary school, I was the only one to go on to further education. I’m sure there were others in my peer group who had bigger ambitions but were held back by the small town mentality that suppressed their hopes and dreams.

While studying for an MLitt in Creative Writing one of the assignments was to write an A to Z on any subject. My classmates wrote about their interests such as music but I was initially stumped over what my ‘Mastermind’ specialist subject would be. Then I realised that I had no trouble writing about my childhood memories so I used this theme to complete the assignment. The piece received my highest grade and I felt it reflected my writing ‘voice’ so I decided to use it as a springboard into a fictional scenario of growing up in 1980s central Scotland in a working class environment. Angela was created to voice the frustrations of being a gifted artist with no scope to develop her talent.

The friendship between Angela and Lorraine is fraught and turning into something different as they mature, and Angela is very confused by this. Teenage girl friendships (and even adult women ones!) can be a minefield and you capture this really well. Why do you think Angela found it so hard to let go and recognise that her friendship with Lorraine probably wasn’t going to stand the test of time?

In creating Angela I wanted to shine a light on how complex emotions can be at that awkward stage of life when you’re moving from girlhood into womanhood. From an early age, Angela has always been the dominant partner in the friendship and uses this ‘power’ to manipulate Lorraine as a way of masking her own insecurities. As the years go by, Lorraine becomes less needy and Angela struggles to accept that her lifelong friend has outgrown their relationship and resorts to desperate measures to cling on to their bond. Like many teenagers, Angela has low self-esteem but her friendship with Lorraine boosts her confidence and means she’s unwilling to abandon it.

Angela says and does some very questionable things throughout the course of the novel and doesn’t ever seem to reflect on them, to question her motives, and realise that she shouldn’t be behaving like this. Is this a reflection of her age, her upbringing and environment, or is that just who she is?

I suppose that’s for the reader to decide but I feel it’s more a question of her immaturity and egocentric attitude. Angela is wrapped up in her own wee world and can’t see the big picture and how her actions could have horrendous consequences on others. She’s been described in some reviews as unlikeable but I didn’t set out to create an evil character. I don’t believe she’s inherently bad; she’s simply a mass of mixed up emotions which in turn lead her to make serious errors of judgement. Thankfully, her gran sees through her inappropriate behaviour and offers guidance and unconditional love.

You explore big themes of class, racism and attitudes to female sexuality and even though we have come a long way since the 1980s I felt that many of the issues surrounding this still had strong parallels with today. Was this something that you felt yourself when writing the story and if so, how did that inform your approach to writing about these themes?

Someone described the book as having every ‘ism’ in it! I wanted to dig down and unearth gritty themes that were topical at the time and reflected the norm within Angela’s world. In many ways things have improved dramatically, for example, I personally suffered sectarian abuse growing up but my sons have never experienced the same scenarios. That’s a positive development but I’m not convinced that the same could be said for the other ‘ism’s.

There’s still a huge amount of work to be done to encourage and support children from deprived backgrounds to go on to further education and I wanted to use a character like Angela to prompt questions over what, if anything, has changed. The book was set 30 years ago and yet the other issues such as racism are still prevalent today and have taken other forms such as Islamophobia.

As regards female sexuality, in one sense women may feel empowered by the choices available to them nowadays but you only have to examine statistics on the conviction rate for rape to realise so much more needs to be done to address the stigma attached to certain crimes. I’d like to hope that Talk of the Toun might stimulate discussion on these themes and whether or not society is a better place in 2015 than it was in 1985.

Thanks so much for coming along, Helen, and giving these insights into Angela’s character. I liked her despite her faults! Talk of the Toun is available from selected bookshops and you can also buy it online from Amazon.

To win a copy of Helen’s novel (for UK-based readers only), let us know in the comments what you think about whether society is a better place now than it was in 1985 and what memories you have of your teenage friendships. The random number generator will pick a winner on Friday 8th January 2016.

8 thoughts on “Year of Indie Debuts: Talk of the Toun”