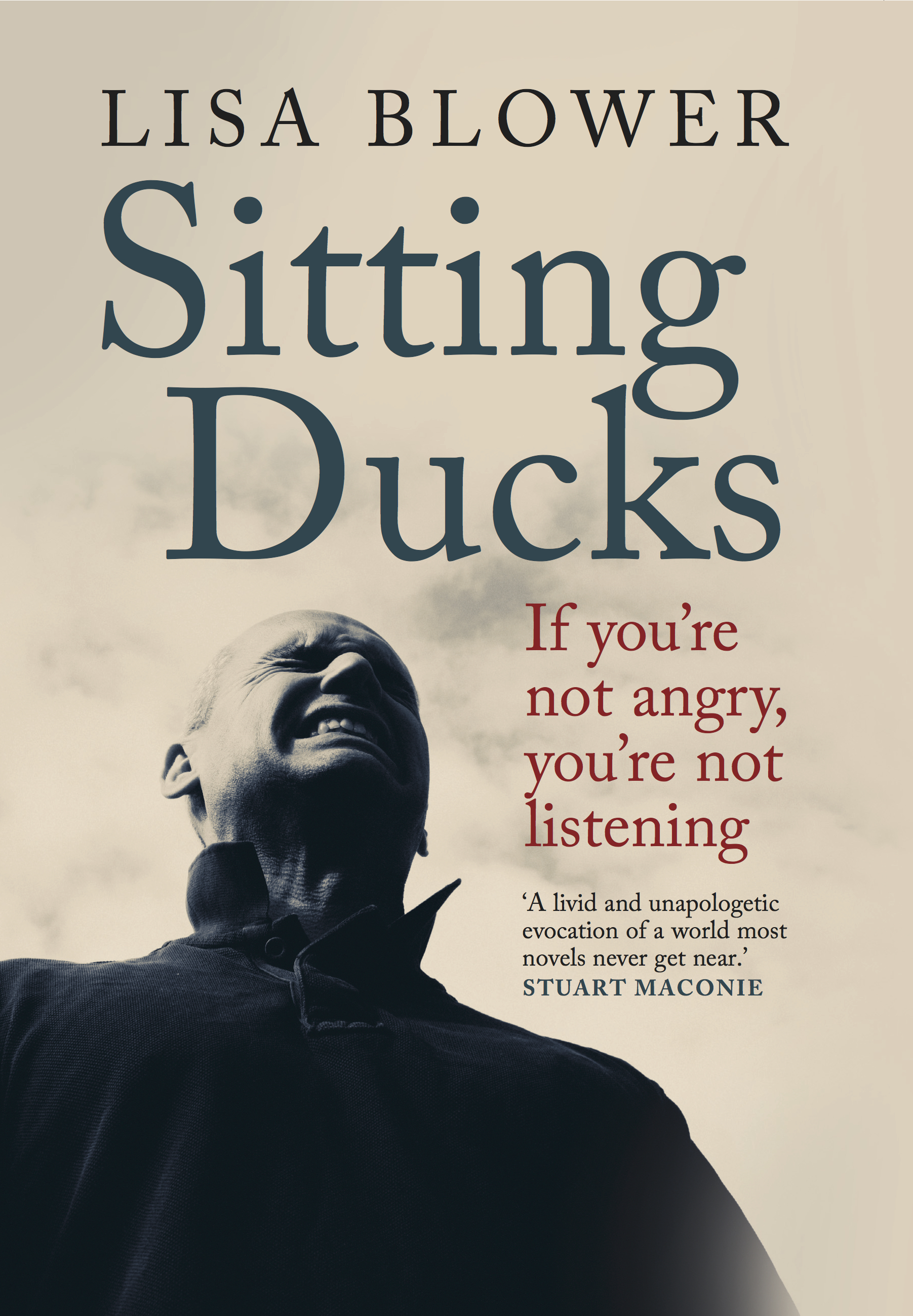 Delighted to have Lisa Blower on the blog for the latest indie debuts highlight. Her novel, Sitting Ducks, was published by Fair Acre Press and recently longlisted for the Guardian Not the Booker Prize. It’s a brilliant read and a very timely look at life for the working classes in Britain today.

Lisa, this feels like a very important tale to tell as the ongoing impact of Tory policies is felt in communities across the UK but it never feels like the message outweighs the characters and the story. How did you make sure your anger at the damage done to these communities didn’t take over the voice of your characters?

When writing about politics and contentious issues such as the social housing crisis, you have to, as a writer, be constantly mindful that it is not a social commentary or manifesto but a work of fiction that needs to engage with readers, despite the hard-hitting facts you are reflecting. Therefore, Sitting Ducks is a story about family, first and foremost, and the centrality and prominence of that family is crucial to the story.

This meant creating believable and engaging characters that readers would really care about in order to care about their situation and then the cause of that situation. So, I spent a long time crafting my characters, drawing from experience, reading a lot of working-class literature to ensure I was never sentimentalising the brutal realities of their situation. Above all, I really concentrated on their voices. I’m a character-driven, voice-led writer anyway – I hear their voices before the story starts to manifest – and when I can hear them clearly (Constance, in particular, was crystal clear from the beginning, as was Kirty because she was a spot of recycling from ‘Broken Crockery’)  I can start to become them and really engage with their world. Certainly, I had to be true to their anger – situations like this are maddening, unkind and utterly unfair, and most of us are terribly lucky to not experience situations like this – but it was equally important to show their resilience, determination and devotion to one another, however skewed their motives were. I’m really pleased to hear that came through.

Your main character Totty is pushed and pulled in so many directions by everyone in his life and doesn’t ever seem to want to take responsibility for himself and his actions. Is he meant to be a reflection of how everyone always wants someone else to blame in our society today?

Yes and no. Yes, because there is someone to blame. And what Totty reels from is his inability to get himself in front of those people to say, Look! Look what your policies mean to someone like me and my family!  and articulately. His story is really about how his lack of aspiration to social mobility demonises him, and there is nothing more frustrating than being demonised and excluded and pushed into a margin of society undeservedly or as a process of policy: and then for the boundaries to keep on changing making it harder and harder to get out. However, he is also a very absent character and I did write him to purposefully only exist on the periphery so as to amplify his situation.

No, because blame culture is a convenient way to point the finger rather than be accountable and though a lot of readers might think they only have themselves to blame, Totty does take a lot of this blame on the chin. He recognises that he hasn’t been the son, the father, the man he wants to be and he’s watched his childhood friends succeed and overwhelm him, despite them all starting out the same way. However, I leave it up to the reader to decide just how much Constance is to blame for this!

The lives of people from all classes and levels of society are shown to be linked. What made you want to explore how this interconnectedness has been forgotten in the age of individualism?

Capitalism and Conservative policy is about the individual and looking after number one and there does sometimes feel, at least to me, that we are now all in it for ourselves. Consequently, what I’m interested in reflecting in my fiction is firstly the fallout of this: the breakdown of communities and neighbourliness, the lack of social cohesion that creates social isolation: then there’s the rise of internet use, virtual friends and perfected versions of self through social media’s brag pages where celebrity is currency (I did my PhD thesis on this), and finally the way the media plays a big part in steering categorisation and marginalisation.

Secondly, Sitting Ducks takes the concept of the Seven Class citizen and breaks it down, reflecting all classes and then how they can’t help but interrelate: one is cause for the other, one is the product of another, one aspires to become the other, one manages the other, and so on and so forth. Because of this social structuring, our lives are intrinsically linked to one another. Whether it’s through family, employment, location, hobbies, political standing. We might view ourselves increasingly individually, but we still seek out, participate and contribute to the group for whatever reason, and by doing so, we interconnect.

In Sitting Ducks however, I am also reflecting the working-class mindset of us ‘v’ them and that meant breaking down what ‘us’ and ‘them’ meant in terms of today’s society and then focusing upon those ‘in between’, I suppose, (Jake as a social worker, Della as a teacher, Frank as a Police Officer) as interrelational to both.

Although it is a very bleak tale there is also a lot of dark humour and it does feel like there is still a strong vein of hope running through it and that there could still be a chance for the younger members of your cast. Do you believe this to still be true in today’s UK?

Sitting Ducks can be read as a story reflecting what is essentially a very bleak situation – a family is being evicted from their council owned home and forced into private accommodation where they become victims of landlordism. In fact, I could argue, that the very concept of landlordism, which Right to Buy went some way to create, has become an incredibly bleak situation for many otherwise reliant upon social housing; as the current housing crisis is equally as bleak. So yes, I am writing about bleak subjects and the facts that circumscribe those subjects are unavoidably bleak – such as the new Pay-to-Stay policy that passed legislation last December which allows Landlords to hike up rents for families to retain the security of a tenancy. I guess to make the bleakness palatable is to invite humour and if there’s humour, there’s hope and with hope comes optimism. Sitting Ducks is about Constance, Totty, Frank, Della, Jake – all of them working towards securing a more hopeful future for Joss and Kirty – and as a reader, you have to believe, given the novel’s ending, that there will be hope for them.

Why do you want to give a voice to this under-represented element of our society?

Kit De Waal recently called for more white working-class stories in an article for The Guardian. An essay in the New Yorker last week discussed how class, as a subject, was being less and less represented in contemporary fiction. Dead Ink have recently called for essays on the canon, and I will contribute to a panel event with Kit, Tim Lott and Niall Griffiths at the Birmingham Literature Festival in October to discuss this very subject. Sitting Ducks struggled to find a publisher for over a year because most publishers found it “too angry, too political and too working-class,” and I am often told, even by friends, to perhaps avoid “the working-class thing” as it’s too raw.

This utterly frustrates me as much as it does many authors. Because we are all just wanting to write good fiction, good stories, and simply reacting to our own imaginations. For the past six years, I have been motivated to write short stories about subjects that really interest me such as the notion of retirement when a life’s been defined by work (Dirty Laundry, Chuck and Di), or being a happy hooker in light of postmodern feminism (The Land of Make Believe, which was Highly Commended in the Bridport Prize 2015). But I also think that it is more essential than ever given Brexit, the housing crisis, the fracturing of the Labour party, for working-class fiction to keep on finding its voice, if not to move away, as far as possible, from the poverty porn tag that has completely derided both the working-classes and their representation through ‘entertainment’. And contemporary working-class fictions are doing nothing that Lawrence, Dickens, Hardy, or Sillitoe didn’t do. It comes down to reader appetite I suppose, accessibility, and that old adage that readers prefer fiction for escape rather than being a big fat reminder of what’s really going on out there.

What’s next from you?
A short story collection, ‘It’s Gone Dark over Bill’s Mother’s’ inspired by my childhood in the Potteries, and a second novel, ‘Green Blind‘. I was recently writer in residence at Shrewsbury Museum and Art Gallery and I drew inspiration from their exhibition on Mary Webb to pen a contemporary reimagining of Gone to Earth. I’m hoping to get it out by 2017 to coincide with the centenary of Gone To Earth’s first publication.

Thanks for coming, Lisa, and for such great insights into your characters and your thoughts on the current social climate in the UK.

You can get a copy of Sitting Ducks here and keep up to date with Lisa’s writing news on her website.