March 24, 2017March 20, 2017
I first met today’s Indie Debut star in real life at the launch of my own debut novel last April and just after her flash fiction, Last Judgement, had won her a place at the 2016 Short Story Retreat, so I knew that I was going to be in for a treat when the time came to read her debut novel, Electric Souk.

That hunch was proved right and it is a gripping read, set in the Middle East in the run up to and during the Arab Spring. The main character Aishling finds herself caught up in all kinds of trouble she hadn’t envisaged when relocating there for a job, hoping to find an escape from a love affair gone wrong and the austerity in Ireland following the global financial crisis.

Congratulations Rose on the launch of your excellent debut and thanks for coming to chat to us about it today. Electric Souk has a creeping sense of dread and paranoia running through it that put me in mind of Patricia Highsmith’s writing. Is she an inspiration for you? What other authors have inspired your work and why?

My influences perhaps seem a little strange for a contemporary novel set in the Middle East, however I think Emily Bronte’s cruel moors and Hardy’s brooding Wessex influenced my desire for the desert to be as much a character in Electric Souk as any of the human characters. I’m drawn to intense, dark settings and novels and wanted to capture this psychological atmosphere, as the desert is the one landscape I have encountered that truly terrifies me. It strips you down to your most foetal fears.

I also see the influence of the Latin American magical realists. In the works of Marques, Borges, Allende, all of which I have devoured, the personal is political and vice versa. In times when it is impossible to know what is true and who to believe, they reveal how we can only really trust in story tellers. Even if they write of interfering family ghosts and other phenomena, this only serves to heighten the unreality of the brutal regimes.

My other great influences are the Irish writers Jennifer Johnston, Edna O’Brien and Kate O’Brien for their exploration of the internal emotional worlds of women in repressive times. Their women fight their families, their societies and themselves for their independence.

Answering this question has been fascinating as I’ve seen patterns and threads right back to my teenage years, when O and A levels meant I read the classics, and because I loved them so much I read them widely. I was drawn, now I see, to understand and know more of fearful landscapes, as a teenager just stepping out from home into the wider world.

In my twenties it was all about the politics of the wider world, these were turbulent times, the first Gulf war, Bosnia, Rwanda. I sought understanding of man’s brutality in the magical realists. My thirties were about my roots, Irish literature and the intimate world of relationships as I tried to understand more about those closest to me, retreating from the horrors of the post 9/11 world, recognising the meaning, joy and pain in our own worlds.

I’m not sure I can quite see the patterns in my forties yet. I’ve become a writer and now I read much more randomly as I read novels of friends, recommendations of writer friends, and novels that haven’t even been published yet. Every decade has been wondrous, but this is proving to be the most adventurous, the most free, the most surprising, so I am curious about what will happen to my writing now!

Your narrator, Aisling, seems consumed with finding love and this leads her into some difficult situations where she puts her trust in some people she probably shouldn’t. Trust and whether you can ever really know other people was a strong theme in the book, so can you tell us what made you want to explore this?

Trust is how we connect to each other, to the world. In our daily lives we have a constellation of points of references that help us to trust – in our friends, colleagues, people we meet, our news, events, the machinery of how government and society function.

We have personal and cultural histories that mean we can make assessments, judgements, be alert to risks and dangers, and open ourselves to others and experiences. On a day to day basis we mostly don’t realise the extent of these reference points and how our past equips us to move forwards. When Aisling goes to the desert all those reference points are torn away.

She knows only one person there, the elusive, poetic Professor, who gives her no obvious pointers and nothing is obvious, as it’s a world where women are fully veiled, the locals live in villas behind high walls, nothing is written down and everything is rumour and paranoia. I wanted to explore what happens when all your anchors are gone. How do you trust and connect? Who do you trust? Do you become more cautious or do you throw caution to the wind, for once, as you are in a place where there is no one from home to judge you, remind you of mistakes?

In such dizzying freedom can you even hear, let alone listen, to your own instincts any more? When I was in the Middle East I was bewildered by these questions and choices. I rocketed between wild abandon, putting myself at far more risk than I ever would at home, where in fact I had more safety nets and friends to catch me when I fell; and, a deeper sense of caution and mistrust, drawn from a very real sharpening of my instincts in such a hidden world. In the Middle East people judge you in the first moments they meet you on whether you have a ‘clear heart.’

Laila in Electric Souk has an unerring ability in this regard, and many of my female friends had this and it fascinated me. Using my new, razor instinct to see if a heart was clear became the only thing I could trust.

The beauty and brutality of the desert is its mystery, and I learnt that’s how it should be.

The landscape and setting you paint are truly evocative and serve to enhance the sense of dread and paranoia really well. Was life in the desert really this disorientating and scary?

It’s just so opposite to our lives in the West. It’s a nocturnal culture, and like the night so much is hidden, only glimpsed briefly in the moonlight. Unlike here where so much of our lives is about the written words, from evidence based history and science to even the tweets and texts that dominate our communication; everything there was verbal, all rumour, stories and poetry.

And that’s before you get to the heat. I can’t tell you how a year without rain seriously messes with your head. I longed for rain so much, one night when I spied a sprinkler system spraying the grass at a luxury hotel I had to go and dance in it.

My time certainly had its moments. There were constant threats of purges of foreigners so that their jobs might be given back to locals, who I might add were not remotely interested in public sector jobs, which was why foreigners had been brought in anyway. The expat community, somewhat raddled by long afternoons and evenings drinking, pretty much the only entertainment for many, was utterly paranoid about being deported; and there were all sorts of stories about people getting sent home for unknown offences.

Most of this I think was nonsense, but in a world without celebrities, the ex pats and the locals had to create their own scandal. And there was enough of that for a soap opera – affairs, illicit parties, lots of strange men who believed they were secret agents of some sort. Who knows? From One Thousand and One Nights to today, fantasies abound in the desert. And fantasy has to have a dark edge, it has to scare, as its wildest moments reveal the deepest truths.

Can you give us an insight into what you are working on now?

I said I would never write a novel about a hospital, as working for the NHS is my day job and that’s where it should stay. But of course, how could I resist? Where else do you see all of life, usually at its most intense points, from cradle to grave – and believe me, on some shadowy wards, beyond the grave. And nowhere else have I met such extreme characters, mostly too extreme to put in page and be believed.

In part I put this down to twenty plus years of untreated psychosis in the political, managerial and clinical culture of the health service, which is now having a full-on episode, beyond the help of Lithium. I am intrigued by the psychological impact of relentless targets, inspections and cuts on the pressure cooker environment of the hospital and those in it.

I’ve written just over 40,000 words and my two lead characters, inspired by Beatrice and Benedict in Measure for Measure, a quite psychotic play in itself, are behaving true to type, although they seem to be fighting and provoking me rather than each other. My working title is Special Measures and I think I’m going to have to put my novel into special measures to stop my characters squabbling and get it finished.

Thanks again for coming, Rose. A brilliant interview and we look forward to reading more of your work soon.

Book blurb: Humanity blisters in this haunting, lyrical thriller about trust and treachery. Ireland’s gone bust, and with it Aisling Finn’s life. She flees austerity for adventure in the desert. But the Arabia she finds is not that of her dreams. Everyone is chasing a fast buck, a fast woman and another G&T. Expats and locals alike prickle with paranoia.

Debonair fixer, Brian Rothmann, charms Aisling with champagne brunches and nights at Bedouin camps. But is Brian a hero or a desperate expat prepared to go to any lengths to get what he wants? Is this Aisling? Or is he using her as bait? Her only hope is Hisham, a local activist. But where do his loyalties lie?

Aisling faces severe peril when the sleazy expat and blood-lusting desert worlds collide, as the Arab Spring erupts. She has to ask, whom can she trust? Can she even trust herself?

About the author: Rose McGinty is an alumna of Faber Academy 2015/16. By night she is a writer, by day a NHS 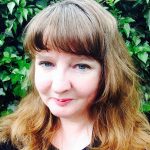 Director in London and has worked internationally. She studied literature at the University of Kent, Canterbury and her M.Phil at Trinity College, Dublin.

Rose enjoys writing short stories, poetry and flash fiction and has won a number of competitions, including: the inaugural Kent Life magazine short story competition with her story, Dreamland, published in the April 2016 issue and aired on Channel Radio, Kent Life; the Scottish Ghost Story competition 2016 for her story, A Kentish Longtail, which was read out at the Festival of Dreams at the Scottish National Library in October 2016 and can be viewed on YouTube.

Electric Souk is available from Urbane Publications, Amazon and in-store in selected Waterstones and Foyles. It is also in a WHSmith travel promotion and you can get a copy at train station and airport stores across the UK.