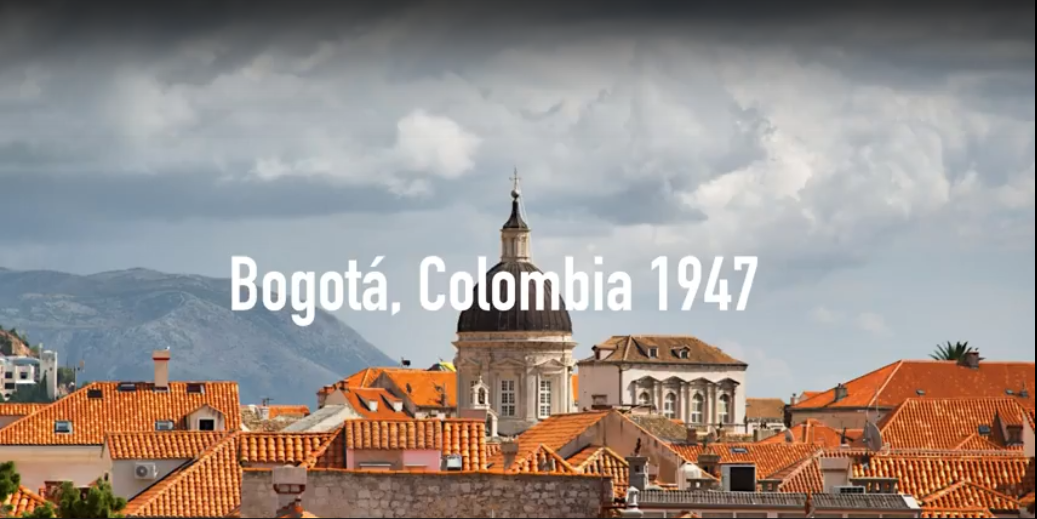 Author Helen Young on the inspiration behind her new novel, Breakfast in Bogotá

Set in 1940s Colombia, Helen is actively crowdfunding her novel with Unbound. Here, she opens up about bringing a forgotten city to life and travelling thousands of miles in search of character.

Thanks for coming on the blog, Helen. So tell us the all important bit…what’s the book about?

Breakfast in Bogotá is about a broken architect trying to build something new. Firstly, for himself, but then for a nation – or so he thinks. The story begins in post-war Colombia – 1947 to be exact. It wasn’t that much different to Europe then. Everyday people were still reeling from hyper-inflated food and fuel prices, whilst the rich thrived. The novel opens with Luke Vosey, an architect, witnessing something horrific over breakfast in a central city cantina.

Luke has fled his life in Europe and a woman known only as Catherine. He thinks he’s safe in Colombia and out of it, but that’s far from true. He meets a young journalist, Camilo and a draughtswoman called Felisa. Through them, he sees that more people are broken in Colombia than in Europe. Events come to a head with the assassination of the leader of the liberal party on the streets of the capital. Following this, the people tear the city to shreds. That’s a real turning point for Bogotá, and for Luke. Things go full circle for him then. It’s a novel of redemption and learning to look back to move forwards – if he can.

I wanted to blow the lid off stereotype and show what came before the drug cartels. About three years ago I was in an area called La Merced in Bogotá and started to pay attention to the mock-Tudor architecture there. It was extraordinary – how high on this Andean plateau someone in the 1930s had decided to build these red brick Elizabethan-style houses. I thought there was something in that. I found the contrast fascinating and it got me thinking about the kind of city that came before the one we have today. Nowadays, the city is polluted and full of high-rise apartment blocks. In many places the past has been erased. It’s a cautious city now – most people still live behind barbed wire fences and with 24-hour security; when you look back at the 30s and 40s, these same streets are sweeping wide avenues with houses and low-level apartment blocks. The assassination of Gaitán on its streets and what this did to the people, how their grief manifested itself (in Bogotá’s destruction), fascinated me.

What did you find when you went looking?

I managed to get hold of some fantastic resources published by the national library in Bogotá. Maps and aerial-photography which show the city before the riots and after. It really helped me to build up a detailed plan of the city in the late 1940s. I really enjoyed laying the tram route (tram cars were set on fire and the lines destroyed by the rioting in ’48) over the modern day road plan and reinstating the grand railway stations and lines (also now lost). All these things exist only as scars on top of the modern city now. Those aerial-photographs enabled me to track the progress of the riots too – to see how far spread it was. Aside from the city centre and those buildings around the presidential palace, the rioters went after buildings they knew were owned by wealthy residents outside of the centre. On the images, you’d have a perfect street and then one house completely gutted. That’s how it was. That’s how broken things had become between the rich and poor.

Why not? Unbound is a forward-thinking publisher who offer authors, like myself, the opportunity to get their words out there. It’s been a real lesson in organisation and personal empowerment to run my campaign. It’s crowdfunding now, if you’re interested in reading it too. A pledge at the following link gets you a copy of the book on publication day and your name in the book. I am working so hard to get this funded right now. I’d invite anyone to join me on this journey back to 1940s Colombia; it’s a real eye-opener, believe me.

You can pledge to pre-order a copy of Breakfast in Bogotá now at https://unbound.com/books/breakfast-in-bogota/