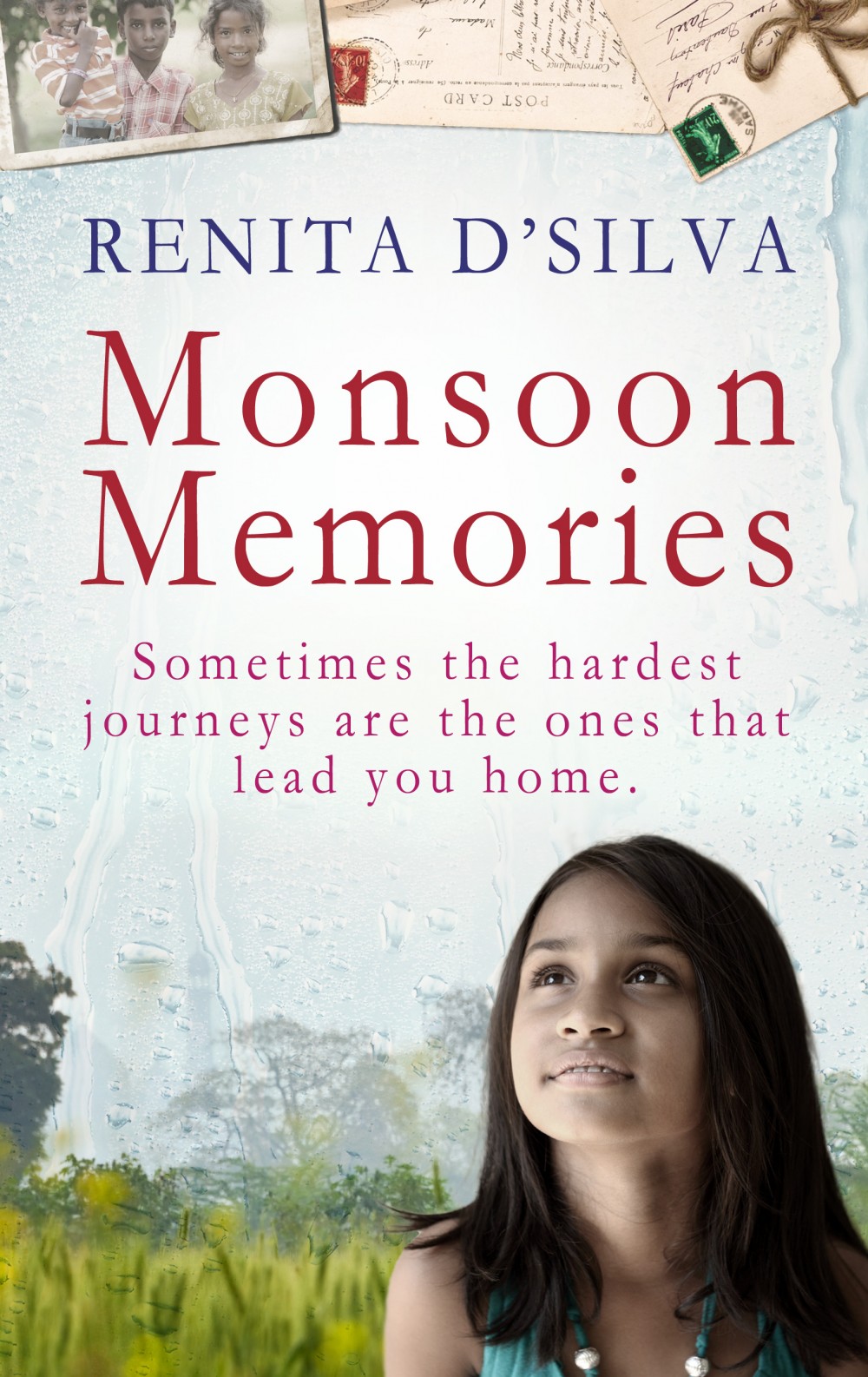 My guest author today is Renita D’Silva – she’s talking about the inspiration for her debut novel, Monsoon Memories, which came out in 2014 and covers lots of my favourite elements in a novel – secrets, lies and family ties…

On freezing, windswept afternoons, when naked trees wave their bare branches like zombies in horror movies, when the icy air smells of winter and tastes grey, of yearning, I close my eyes and picture my childhood home. Swathes of velvet green fields billow gracefully in the fragranced breeze. The pearly drops dotting them – a legacy of that morning’s monsoon shower – twinkle and gleam in the playful sunshine like the eyes of a woman in love.

Hills undulate in the distance, mossy emerald interspersed with reddish brown. Women in multi-hued saris gossip while munching paan, men hoist their lungis as they go about their chores. The water in the stream giggles as it trips over stones. The smell of rain, churned earth, spices and heat. The taste of my grandmother’s cooking: red rice smothered in tangy curd flavoured with green chilli, accompanied by dry fish chutney. The exquisite comfort of my mother’s touch.

Memories. They define you, they are the framework bolstering your past, bridging it to your future.

I first started writing Monsoon Memories, my debut, in November, on one of those days so typical of an English winter, when blonde rays of weak sunlight struggle to pierce the overcast skies. The trees and bushes were bereft. Everything was hushed, waiting for the wake-up call of spring that would bring with it yellow daffodils and the promise of summer.

‘Write about what you know’ all the books on writing advised. And so I did. I imagined a girl huddling on a veranda, sipping warm tea and eating spicy vadais smacking of oil and contentment, the sound of the rain and the muted notes of the plaintive song of women planting paddy saplings in the fields below arousing in her a strange longing. A young girl with her whole life ahead of her, waiting for her to lay claim to it. I could relate to this girl. I was her.

And then, I had a thought. Even in the throes of winter, when the world is stamped out by a curtain of fog, I can escape to a sunnier, more colourful place in my memories. What if this girl – now a woman living in England – couldn’t do that? What if her memories were tainted by something that had happened, something so dreadful that she couldn’t think of her past, couldn’t recall even one good memory without the spectre of what had happened haunting, looming? Who was she, this girl who couldn’t claim her past? And thus, Shirin was born.

And then, Reena demanded space in my story, her voice insistent in my head. A girl on the cusp of adolescence, who, on a gloomy monsoon afternoon accesses memories of a time before her through the medium of old photographs. An inquisitive girl, tracing her roots, wanting to anchor herself to the past. Supposing she found a picture that she wasn’t meant to find, one that should have been destroyed. And just like that, everything she has ever believed about herself, her family, the framework that defines her world, disintegrates into a mess of sorry lies and subterfuge instigated by the adults in her life.

But, at the moment of discovery, she is still blissfully ignorant of the import of what she has found, what that one contraband picture will unleash, unaware that her decision to keep the picture and delve into the mysteries lurking there, will determine what is to come.

Afterwards, when her innocence is irrevocably lost, this girl, Reena, wonders what she can believe if she has to question everything she has trusted implicitly so far, if she has to look again at everything her parents told her and filter it for lies. It is like trying to sieve rice using a spaghetti strainer. Everything falls through and nothing remains.

And that is how I created Monsoon Memories. It is the story of a woman who cannot access her memories, her past, without facing the horror she has shied away from, so that she is now existing, not living, someone who has lost herself. And it is the story of a girl who gets a glimpse into a memory set in her father’s childhood that she wasn’t meant to access, preserved via a photograph that was meant to be destroyed – all this happening against a background of monsoon rain that drums on the tiles and slithers down the walls like never-ending tears.

Many thanks for coming on the blog, Renita. You can get a copy of Monsoon Memories here, keep up to date with Renita’s writing news on her website, and also connect with her on Twitter.

From novice to novelist by Christmas