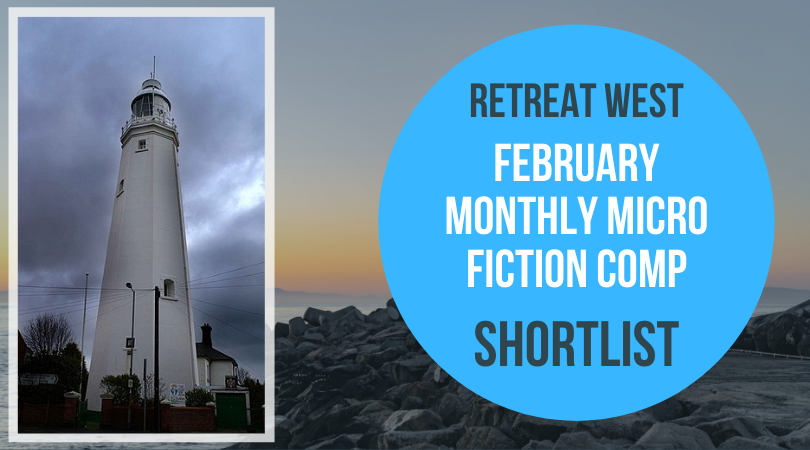 Once again, thank you to everyone who submitted to our lighthouse-themed comp and well done if you made the longlist! We received our highest ever number of entries, so the prize fund for the winner is a spectacular £260!

And thank you to Ali Thurm for providing our prompt! Retreat West Books will publish Ali’s debut novel One Scheme of Happiness on 27th February. You can pre-order your copy here or find out more about her unsettling tale of uneasy friendships on our website here.

Voting is anonymous so please don’t tell anyone what your story is called.

Voting is now open until 23:59 on Monday 24th February. Winners will be announced on Tuesday 25th.

Enjoy these great micro fiction stories and then vote for your favourite in the poll at the end of the post.

A Warning to Those at Sea

You saw me, in my element, dancing in the waves. Those body rolls, you said, hands skimming down my curves, pausing again at that place where scales met skin. I shivered, wanting more.

If you loved me, you would, you said, as I undulated back into my briny loneliness.

People say the rocks are sharp as daggers. But that’s nothing to the vicious bite of new-hewn feet on land. To the agony of your betrayal.

You cast off from the shore again, so here I am.

To put out the light.

Your holiday will begin with an exciting boat ride to the island.

The management confirms these will eventually disappear.

The lighthouse, being operational, has an electronic fog signal. Guests can use the ear plugs provided to mute the sounds of the ghost pipers, the siren songs and the monster Modernity as it rolls and crushes, rolls and crushes.

His face is passive, he’s survived tempests, my temper is nothing.

‘Time passes quickly up here.’ His eyes are on the horizon, I am no more distracting than the wheeling herring gulls outside. I try again.

‘You could’ve written. We thought you were dead.’

He turns away, pours water from a battered kettle into an equally distressed teapot. The familiar domesticity of his movements enrages me, but I take the cup when it’s offered. He peers at the brass barometer on the wall and frowns.

‘Change.’ He says. I put down the cup and hug him.

The lighthouse beam eclipses the smoky-faced moon, which is waxing gibbous tonight. Its dazzling ribbon floods the tormented sea, leaving the rocks in darkness, while I loiter here alone at the top of the steps.

I was guided to this place through the dreamscape, and from here I see it all – what has happened and what is still to come. As I listen to the gentle swoosh of the rotations, I count the eclipses till I run out of numbers. I can see things now as the ancients once saw them and the future is brimming brighter than ever.

Goodbye to all That

There are 4 of them. All dressed in shades of black except for Davy. Davy is in grey which matches the sky. They laugh at Jimmy because he says his suit is the colour of outer space.

“The salesman in the shop said so.” It’s the first time they have laughed today.

The lighthouse where they once played, hid, ran to, is boarded up now. Rust bleeding into plaster, the lamp long since extinguished.

“Ready?” says Graham. They nod in unison and watch as he scatters ashes on the wind and the ghosts of 60 years ago dance in the dust.

Low tide, and she hitches her skirts waist-high, wades through salt and bladderwrack. Linen petticoats begin to bloat; silt squashes between toes.

She reaches the iron tower on the rocks, its fire licking rainclouds.

The package between her breasts remains dry: nutmeg, mandrake.

She looks back. They begin to line the beach, armed with torches. But she will do as she pleases. She will lie beneath the tower’s heat, while her cunning, quick fingers conjure him, again, in an unholy prayer.

And she will stay here, with him, entranced – until the fire above her wanes into embers and ash.

As we approach through the conifers, you say it is your mother. Solitary in starched skirt, rocky edges hewn cold and sharp, her beacon-face both warning and admonishment. And from that tiny barred window of a mouth: Watch you don’t turn out like your father.

Back home, while you sleep, I ease a sonic screwdriver under your pillow, with a note: For those tricky, maternal moments. And whisper that I know—with that same conviction with which tide lures ship to sandbank—you will never be like him.

You once said stars are lighthouses in space, guiding people onwards.

Aged six, I gained a C grade for my project describing how lighthouses protect ships from angry waves.

Aged eleven, I received an A grade for my poem depicting mothers as lighthouses and fathers as volatile waves.

After he left, we bought a boat and visited a different lighthouse every weekend.

In hospital, I hold your hand, crepey brown like a treasure map and wait for you to find your star.

They bring a revolving night-light to your room and we watch its cool finger sweep the ceiling. Your breath slows to match its rhythm and I imagine your tinnitus whispering traveller’s tales in murmurs of the sea. Though I stare deep into the ebb tide of your ocean eyes, you drift beyond my reach.

Born under its beam, you ensured the light shone true. Now your own is fading.

Your absence aches in the grey dawn. Looking from the corridor window, the lighthouse stands sentinel. Through dissolving mist, its beam caresses me while it lights your way.

The air around the lighthouse is possessed of a new and fickle madness. The lamp’s beams dance across the shoulders of the rowing girl and touch her face: her expression a thundercloud of grief for the ancient betrayal of her sex. Around her, water, cold enough to crack human skin, licks the spines of sea-urchins who trace the shadows of her oars, watchful and ready.

As the girl’s boat shivers between the rocks, her laugh envelopes the grinding wind, like needles shrouded in silk: sharp enough to be mistaken for her mother’s wail, sincere enough to herald the same fate.

If you can’t see or use the voting panel below, you can cast your vote on this link: https://form.responster.com/rlHqEb