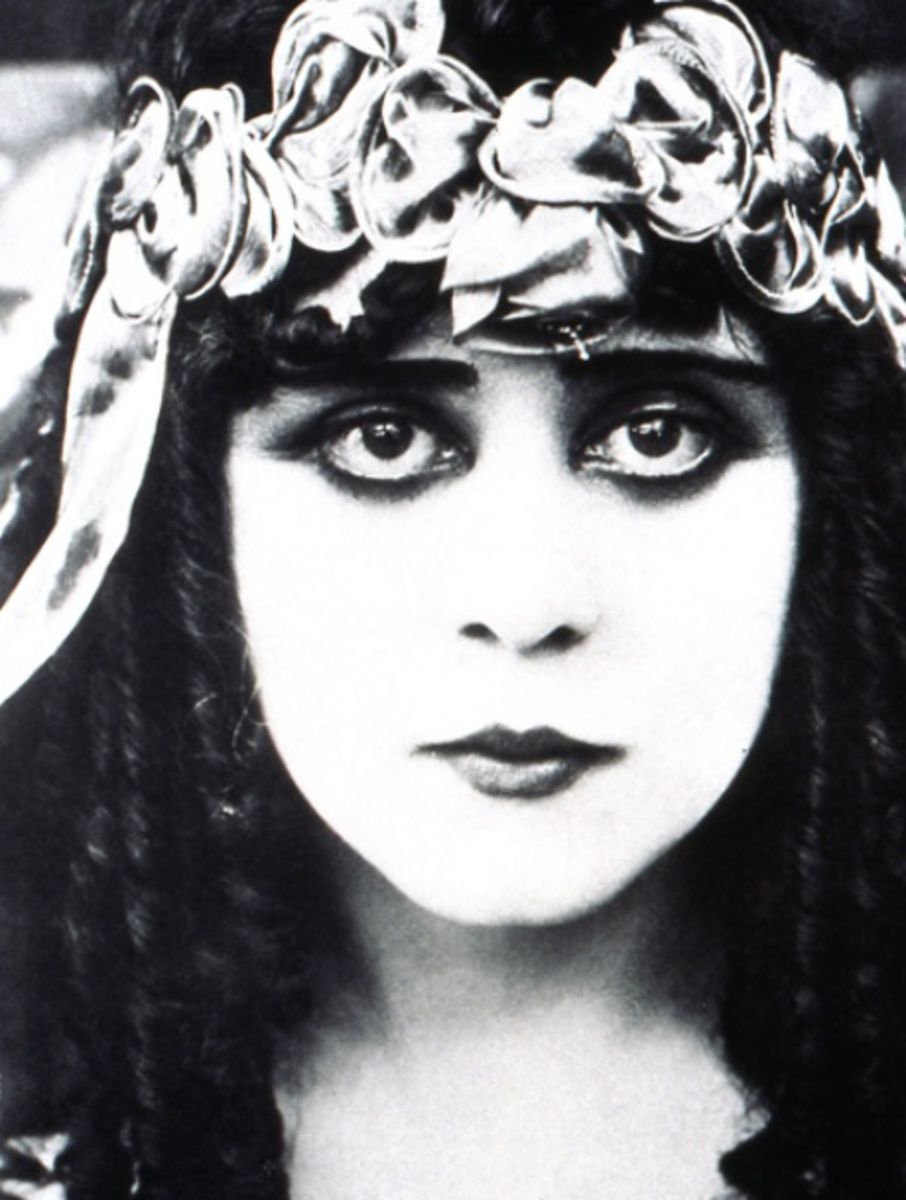 Very happy to welcome Essie Fox to the blog for the first time today. I met Essie at an event earlier this year and immediately bought a copy of her novel, The Somnambulist, so was thrilled when I got an advance copy of her latest novel, The Last Days of Leda Grey, over the summer so that I could interview her for the blog. It’s an absorbing and surreal story that I’m going to have to read again as I think there are so many layers that it warrants a slower, second read.

Essie, the imagery you’ve created to describe the silent films that Leda Grey stars in completely transported me into that world – what attracted you to write about this era of early movie entertainment?

I’d been wandering around the Brighton Lanes when I saw some small posters of Theda Bara – a kohl-eyed, vampish movie star from the earliest years of silent film whose look is quite iconic now. There is something very alluring, almost modern to be found in her daring gaze, so much so that I found myself desperate to research any films that she’d once made. I discovered that she is now best known for her role as Cleopatra (a theme that comes up in my book as well) and even though that film is lost we still have the stills to show the world what a charismatic star she was.

At about the same time I came across a short film digitized by the BFI – a sort of documentary that dates back to the Edwardian era. It is what was called a ‘natural’; which is simply capturing a view of what’s going on in an everyday scene – whether in the country or the town, at a factory, or even a day at the races. Almost anything and everything was covered by early cameramen.

This natural is called Morecambe Seafront, and when seeing the people strolling there – how vivid and ‘modern’ they looked to me – I couldn’t help but find myself imagining such an Edwardian world. But rather than in Morceambe I set my world in Brighton, in the very same narrow cluttered lanes where Theda caught my eye one day.

And that’s how Leda Grey was formed. First as a child on a promenade who is delighted to find herself being filmed by a moving camera man – and then as the dark-haired alluring young woman who yearns to act in silent films: who never feels quite so alive as she does when playing ‘other’ roles. But then, Leda is the great deceiver.

Your narrator Ed is so completely drawn into the past life of Leda Grey and the films she made that the present day begins to feel less real to him, but I got the sense he was just using this as an opportunity to avoid the things he couldn’t face up to. Without giving anything away – things don’t turn out for Ed as I’d imagined they would – what do you think he learned from the experience?

You’re right. When we first meet Ed he’s looking to find an escape route from the tragic events in his own past which have haunted him for many years. He’s also running away from his career as a London journalist, no longer feeling any sense of pride or satisfaction – and for which I drew on memories of my own job in Fleet Street in the early 1980s.

Personally, Ed’s life is a mess. He has no serious loves or friends, because of not daring to open his heart; always fearing that he might be hurt. But, meeting the reclusive Leda Grey, who is then an elderly woman, at first gives him some newfound hope of finding a story that will aid his ambitions for serious writing work. In fact, it unearths more demons as he enters Leda’s twilight world and is rapidly drawn under her spell. There, while she reveals her past, Ed’s own memories rise up, until he comes to realise that hiding away from truth and pain can never be an answer – that we can’t always carry the burden for the wrongs committed by those we’ve loved. We only have one chance at life and must do our best to grab at it. Real life is not a fantasy.

Illusions, allusions and confusion are layered throughout the story, meaning it’s hard to always grasp what’s real and what’s not, but it all comes together at the end. Did you have the ending in place early on or did the story reveal its conclusion in the writing?

While watching Victorian and Edwardian films I realised that many of those early directors had actually been stage magicians, or at least used the smoke and mirror tricks that were often employed in theatres. On film, those tricks could be enhanced, so that people ‘literally’ disappeared, or appeared as wispy spirits. Objects could fly around a room. Movements could speed up, or else slow down. It created a brand new magic of fantastical illusion. All sorts of opportunities to unnerve and surprise an audience.

I had great fun researching many classics from those early years – many of which were really made around the Brighton area. I then decided how I might employ their ‘tricks’ in Leda’s films. But, I also took themes from more recent films that have ‘stayed’ with me since childhood. Films like The Singing Ringing Tree, a decidedly gothic drama screened on TV in the sixties, which is themed around dark fairytales, and how we must suffer to be redeemed. There is the film The Dead of Night, a collection of different ghost stories which scared Ed as much as it once scared me – with a living ventriloquist’s dummy, and a haunted Victorian nursery, and mirror that shows the room behind as it used to look in years gone by. And then there is The Haunting, the version from 1963 which is based on Shirley Jackson’s novel The Haunting of Hill House. It has some terrifying scenes, though at the centre of it all is the protagonist’s fragile mental state – just as The Last Days of Leda Grey is drawing on Ed’s own weaknesses.

So, there are the illusions in the films in which my Leda Grey once starred, which Ed then sees when welcomed into her crumbling cliff top house. But there are also the odd effects that seem to echo what’s on screen with what Ed comes to experience when he wanders alone around that house – such as apples that rot before his eyes, or strange reflections in mirrors that reveal some scenes from Leda’s youth. Is it really happening, or is Ed influenced by drugs? Or is the trauma of his past now leading to insanity? Gradually, the truth will out – even though the cost is very dear.

Grief and how it manifests itself is a theme that emerged strongly for me when reading – was this a conscious theme you set out to explore when embarking on this novel?

I knew that I wanted to explore the life of a woman who, for whatever reason, had withdrawn herself from the outside world to live all alone, in obscurity. As a balance to her own story, and also as a way to reveal it, I introduced the character of Ed whose journalistic interest soon grows into something more intense, with Leda Grey embodying the mental crisis that occurs when he finally reaches breaking point.

I’ve always been aware of loss – of our own human mortality – ever since the age of six, when all four of my grandparents had died. Oh, how I grieved for my grandmothers! And now, with The Last Days of Leda Grey, both of my two main characters – one in the past, and one in the more present day – have experienced such loss and pain that they have closed in on themselves emotionally. For Leda, it may be too late to ever change her destiny. But, for Ed … well, to tell would only spoil the book for those who haven’t read it yet.

In my original draft of the novel I actually had a great deal more about Ed’s personal backstory – and how his own mother had been involved in forties and fifties cinema, with some toxic relationships forming there. But the book became so sprawling, and although I loved writing those chapters in the end they simply had to go – to reflect on Ed’s past in more condensed ways.

Perhaps I will use those detailed scenes to write a short story one of these days – something that might enhance the book. But, going back to the novel, I hope I have still retained enough about the traumas from Ed’s past to explain his isolation now. How it is his loneliness that causes him to fall so quickly under Leda’s influence – as an older mother figure, but also the sensual diva – with both incarnations luring him in with an almost irresistible force.

Here I must confess that by the end of the novel I felt as if Leda Grey had taken over my life as well. It is very strange but of all the fictional characters I’ve created in four novels, Leda is the one who ‘lives’ for me; who feels to be most present still. I think that’s the joy of writing – the illusions we almost touch and see; so vivid we can hear them speak.

Thanks so much for coming, Essie, and best of luck with this lovely book.

You can get a copy here and find out more about Essie and her previous novels on her website.