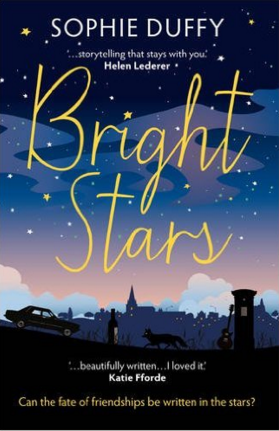 A big welcome back to Sophie Duffy today who has kindly returned to the blog to chat about her latest novel, Bright Stars, which came out late last year. It’s a great read about four friends who meet at university and looks at how the things we do when we’re young reverberate throughout our lives.

Sophie, you returned to your university town of Lancaster to tell the story of four students whose lives were changed forever when they were undergraduates there – is this a story that was inspired by something that happened when you were studying there?

Bright Stars is pure fiction but inspired by the landscape of wind-swept Bailrigg where Lancaster University is situated. I used Lancaster as the setting as I was both an undergrad and a postgrad there and it has played an important part in my life.

Your main character Cameron made me want to shake him so many times and tell him to stand up for himself! For me the central theme of the novel seemed to be based on this, and how some people let terrible things happen to them rather than upsetting people by saying no. Was this something you set out to explore when you started writing this novel?

I wanted to write a story about friendship and about the mistakes we make when we are young – mistakes that can have repercussions down the years. I wanted to ask if we can change the course of our life’s journey years after a wrong path taken in youth. Cameron is a plodder and it takes him a while to grow up and understand that he must take charge of his destiny.

His whole life has turned out to be something very different to what he’d envisaged and he dwells on it, lets it be the reason why he’s not achieved things. When you were discovering his character did you write an alternative narrative for him that shows what his life could have been if he hadn’t got involved with Bex, Tommo and Christie?

I actually wrote the first draft of Bright Stars in the third person from all four main characters’ viewpoints, but something wasn’t quite working. I realised it was Cameron’s story and so I retold it from his point of view in the first person. I wouldn’t have set out to write in the voice of a Scottish man but that is how it panned out and I have grown very fond of him.

Although the four friends all had the potential to be bright stars it wasn’t realised by three of them because of what happened – a story probably all too true about many people’s lives. Regret imbues the whole story but it is also filled with humour. Do you think this is reflective of most people’s lives?

Despite what Edith Piaf says, I think we all have regrets. But it is what we do about those regrets that counts. Do we live our lives in their shadow? Or do we strive to walk in the sunshine? We might not live the life we planned in our youth but it can still be a good and satisfying life. I didn’t become that ballerina – because I was too shy to perform – but I became a writer, which I love.

Many thanks, Sophie. I find it fascinating to hear how other writers find their way into their stories. Telling it from the wrong point of view seems to be a common one!

You can get a free paperback copy of Bright Stars (UK readers only) by telling us what you dreamed of being when you were young and whether you are that now. Just leave a comment below by 9pm on Wednesday 27th January 2016. The winner will be picked by random number generator and announced here.