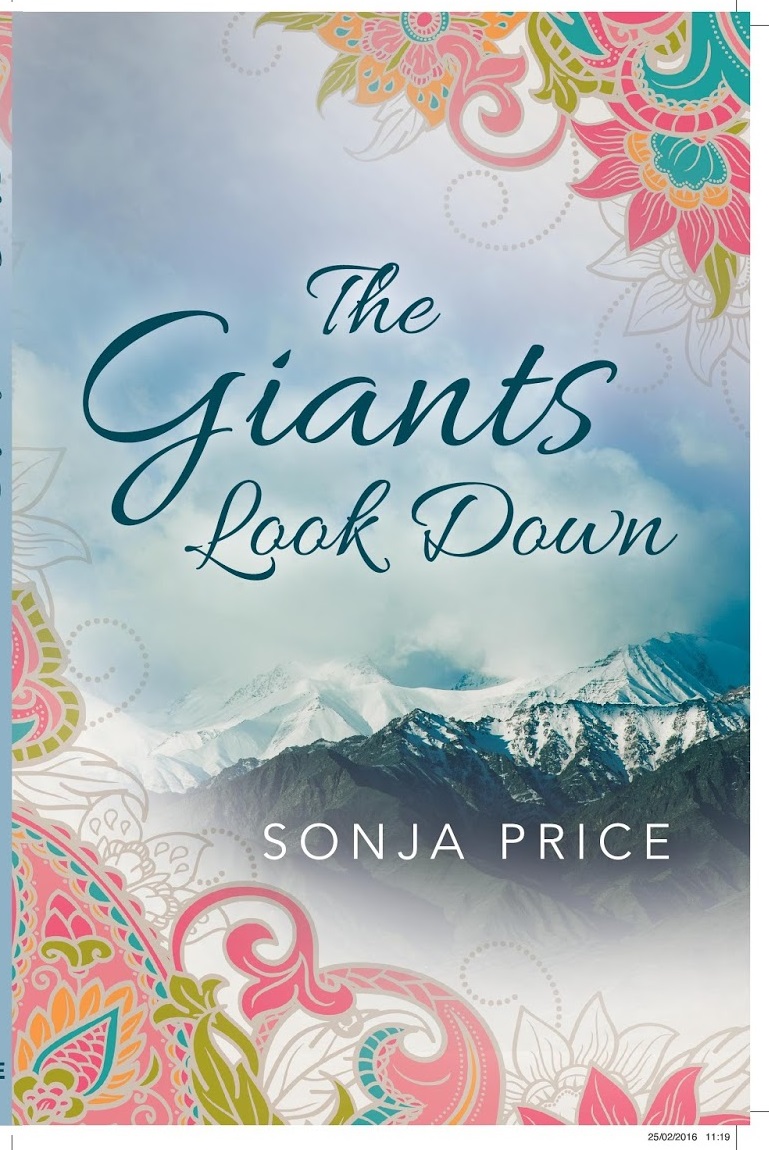 I first met today’s author, Sonja Price, when we both had a story published in the Stories for Homes anthology that is still for sale and raising much needed funds for the housing and homelessness charity, Shelter. So it was a happy coincidence that we both then had our debut novels published within a few weeks of each other this year. Sonja’s novel, The Giants Look Down, is a sweeping story of love, politics, culture and religion played out against the stunning landscapes of Kashmir and Scotland.

Sonja, it’s often said that a writer’s first novel is autobiographical in some way but yours is told mainly through the voice of an Indian girl then woman as we follow her from childhood to adulthood. Can you tell us what inspired you to tell this story?

I was listening to a report on the car radio about the devastating 2005 earthquake in Kashmir, which killed 86,000 people. Tragic though it was, it contained an evocative description of the Himalayas and the string of lakes stretching through the Vale of Kashmir. I could immediately visualize it even though natural disasters and political tensions have blighted the area. I started to imagine the life of a girl who wanted to follow in the footsteps of her father and become a doctor. As the native population is predominantly Muslim, I made my protagonist Hindu for the Vale is now part of India with three wars fought over it. I asked myself, what problems would Jaya and her family encounter in such circumstances, and what would happen if an earthquake were to shatter Jaya’s dream of a career in medicine?

As well as being a love story, this is a book about feminism and a Kashmiri girl overcoming the gender biases of her cultural background to achieve her dream of being a doctor. Do you think she would still have achieved it if she hadn’t ended up in Scotland after the earthquake?

That’s a hard one to answer given that she is such a resilient and resourceful character. But I don’t know how else she would have escaped the arranged marriage to a Punjabi farmer, which would have denied her any chance of further education – the fate, unfortunately, of so many girls in India.

Your landscape and setting descriptions of the valley in Kashmir completely transported me there – have you spent time there or did you write purely from imagination? Can you give any insights into the research you did about the area, its customs, and political situation?

Ok I’ll come clean. It’s pure fantasy. Authors can write about life on Mars so why not about exotic places they have never set foot in? Basically, I let my imagination fly, although I did have a picture book with breathtaking images of the mountains and lakes open besides my laptop. In between I got hold of travel books and read up on the history of the conflicts there. But it was really only after I had penned the first draft, that I did some proper research. I interviewed a dentist who had worked in a hospital there and got some Indians to check my manuscript. To my great relief all the experts said it sounded authentic and it was even sanctioned by one Indian publisher who had it vetted for political dynamite! My agent, Jane Conway-Gordon, who was brought up in India, recognised some of the places I described and loved it.

This is your debut novel but is it the first one you ever completed or do you have some previous books languishing on your laptop that you may revive?

Well, I have written a few short stories which got published in anthologies and a crime novel that is languishing on my laptop. But I think that most writers have one or two first attempts that they deem too unworthy to ever see the light of day, don’t you? When I attended an Arvon workshop on Starting to Write, I told the group about the story I had already written and my budding idea for The Giants Look Down. They unanimously urged me to compete my Himalayan tale.

Once again I have landed up somewhere I’ve never been to! My imagination has come up with Canada this time. It’s about a widow trying to solve the mystery surrounding her husband’s death in a hunting accident out in the wilds. His fate is inexplicably linked to that of the Native American tribe protesting about a pipeline planned across their sacred burial grounds. Entrenched in her grief, Cathy discovers that a mysterious Native American girl had been visiting her husband in his hunting lodge. Were they having an affair and what did she know about his death?

Thanks for coming, Sonja, and revealing your secret of never having been to the places you set your novels!

You can get a copy of The Giants Look Down here; and keep up to date with Sonja’s news on her website.