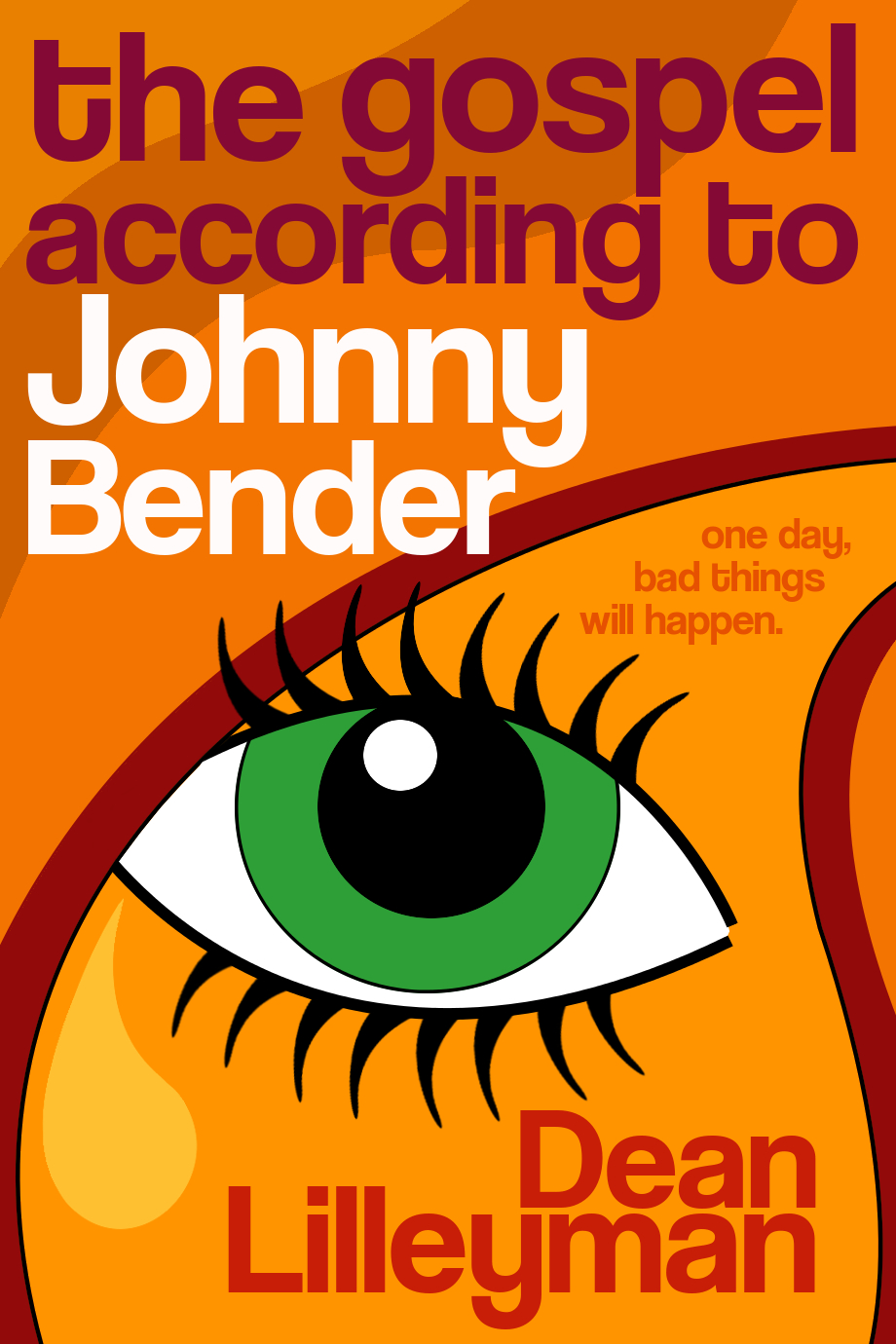 Delighted to welcome Dean Lilleyman back to the blog today. He last visited to talk about his debut novel, Billy and the Devil, which is a reading experience not to be missed. He’s back now on the launch of his new book, The Gospel According to Johnny Bender, which I also thoroughly enjoyed and highly recommend.

During the celebrated carnival of 1979, the villagers danced beneath a mirror-ball, as a young girl drifted dead in the river. Who knew the truth of things? And would the truth matter? Now it’s 1999 and Edendale is holding another carnival. An anniversary to commemorate the life-changing events of twenty years before, by pretending it’s 1979…again. One day, two decades apart, the mirror-ball turning in the dark to light a truth.

Dean, I loved how the 2 days from 1979 and 1999 were weaved together and showed how the past influences the future, and also how some things never change. Can you tell us where the inspiration for this dual timeline story came from?
This all started from a mishmash of things scribbled on my walls, which is how I tend to put stories together. I like the idea of things forming themselves, no questioning why. The more things that get scribbled the more the glue seems to happen. I definitely write from where I’m at, so I guess there’s a relationship between these things, even if they do feel unconnected at first. I think the truth of the thing starts to show itself this way, maybe because I’m not presuming I know.

The Johnny scribbles started coming at a time where my life was dancing fuck-it on one end, but rattling loose at the other. These two ends definitely started to show a clash in the scribbles. For sure the past was trying to grab the now by the scruff and say hang on fella, the future a shrug, the now grinning a so what? Looking back, I see all this as a massive influence on how Johnny happened. And with the scribbles it’s not just what’s happening to me at the time, it’s the stuff I’m taking in. Books, films, music, whatever. Like jamjarring sparks.

When Johnny was coming together, one of the things was definitely seventies disco. It seemed to be soundtracking my headspace bang on. And the more I listened, the more it made sense. As Dennis says to Debbie in the book, soul music is oh baby I want you so much but I can’t have you, while disco says hey, yesterday’s gone, tomorrow’s not even here, only now now now, so let’s do it. There’s a gamble of moment here. Time. This fed another bunch of scribbles about the end of things. Culture seems rammed with this sense of precise guillotine endings from way back. Religious doom declarations, Nostradamus, Hollywood narrative, the end. But what if when one song ends, another begins? On and on, god, a DJ. History repeating, yet with little changes, but the core truth still hums, much like the best dance tracks. A structure that shaped the rhythms of this novel for sure. And, I knew I had to trap all this into an isolated place. So, Edendale.

Three of my favourite stories do this brilliantly. Under Milk Wood. Winesburg, Ohio. The Wicker Man. This instinct that time was to play a big part in this story, the idea that ends become beginnings, made it clear I needed two timelines dancing together. This seemed to offer up a strong frame for the thing that was shouting out about this story. Obsession. What happens when you try to get back something that is dead, gone. If Billy was about being drunk, no love, then much of Johnny is about being drunk on love, a love that becomes an obsession, that becomes a madness, and how far that madness could take you into the deepest hole, a fucked up Plato’s cavern showing the same shadow play over and over, “It’s the same old song, but with a different meaning since you been gone,” on and on. But. Tangent. William Goyen was once asked in an interview what starts him writing. He replied, “It starts with trouble, you don’t think it starts with peace, do you?”

The headiness of a night dancing and drinking, and how it differs but also kind of remains the same for younger and older people, is really well captured and has been used to great effect in driving the plot forward as well as creating atmosphere. How did you choose which songs to use in each part?
The songs are joined at the hip to what’s happening in the story, by lyric or feel or both. I suppose it became a kind of mixtape, or maybe several mixtapes over the course of a relationship. The first one is probably called I think I like you. The second, I think I love you. The third, I want you forever. The fourth, please don’t go I can’t live without you. I think there’s something very beautiful in trying to tell someone something in a song, or a mixtape, or a poem, story, novel.

Johnny Bender is a wonderful narrator that brings a surreal and sensitive element into the story – is he the character that came to you first?
When the wall scribbles became a loose storyline, got painted over and scribbled as a tighter idea, I felt strongly I needed a narrator. A compass. I liked the idea of this story having a flavour of folk tale to it, a bit like Lars von Trier’s Dogville. It makes a good contrary to the fuck-awful goings-on within. Makes the tone richer. As a character, Johnny is definitely modelled on the Shakespearean fool. Talks in riddles, sounds radged, but, if you listen properly and go with the flow, he’s telling you some big truths. When Johnny arrived, it wasn’t long before Blackbird got there too. That’s when I knew I had my story.

Just like in Billy and the Devil you capture small town, small minded England so well – what is it that drives you to delve into the psyche of these kind of characters?
When I first started writing, the writer that grabbed me by the scruff was Raymond Carver. Ordinary people, ordinary problems, delivered in a way that registered the importance of these problems to the character concerned. Feels real. Sounds a bit grandiose, but we’re all the centre of our own universe aren’t we? Our problems are important, because. But, with Edendale, I wanted to play with stereotypes too, twist them a bit, in the same way Sherwood Anderson does in Winesburg, Ohio. In that book he opens with a surreal prologue where an old man has a dream about the beginning of all things. The dream shows him a long line of people queueing up to collect their own personal truths before they enter life. For some people these truths become everything about them, so much so that they become grotesques, their truths walking ahead of them in all they do.

In Edendale there are most definitely people like that. Ordinary people who have become grotesques because of their truths. Mr King is one. Preaching community, yet we see him for what he is, a self-obsessed dickhead obsessed by power. And yes, some people in Edendale are bigots because of this grotesquery. But. Look outside. Turn the news on. Catch the bus into town. So-called shortfalls of resources being blamed on immigration, spawning violence and irrational knee-jerk reactions sparked by lies from self-obsessed powermongers, gobbled up by a worrying mass of people because they want a better quality of living, or some return to a Britain that never really was, buying the empty canted promises of these terrible manipulators, these liars so ridiculous they should be laughed at, but, they’re not, they’re gaining power and momentum based on these lies. History repeating.

But perhaps I’m naïve. My own personal politics, perhaps near childlike. But. Worldwide we seem to have enough resources. The problem is, and if there is going to be an end of times it’s going to be from this: money is now politics and money is now power, more than it has ever been, and yet in one swipe so many problems could be sorted by the simple act of sharing. But the fat cats won’t will they? They want to keep their voice the loudest, and in the world we live in, the loudest are the richest. And it is always, always, the underbelly that suffers, the ordinary people. Always.

Today I saw a video of Syrian children playing in a bomb crater, a bomb crater that had severed the water supply to a large part of a city, the pipe filling the crater with dirty water, and, the children were swimming, and laughing. I couldn’t tell whether this was the most uplifting thing I had seen, or the saddest. Powermongers either side, and these kids in the middle. I don’t even pretend to understand what the fuck is happening over there, and who is doing what for why, but I know this: these are ordinary people trapped by something they have no say in, and yet, we watch, build walls, close borders, stop these people escaping horrors that we are fortunate enough not to even be able to imagine.

In Billy and the Devil, there’s a scene where a farmhand kills a runt while Billy masturbates in the barn loft above, watching. Runts are not profitable. They cost too much to rear, and don’t put on enough bodyweight for saleable meat. It costs nothing to swing them by the back-legs, smash their head into a wall and be done. This is how the world works. History repeating. Again, again. But. 1930s Germany. A group of young people who wanted nothing to do with the rise of dangerous right-wing politics did something remarkable. They met in cellars, and danced to jazz records. Despite the fact that they could be locked up for doing so. In Syria, the kids swim in bomb craters. Tomorrow, they know, is uncertain.

As alway, thanks for your honesty and passion, Dean, which jumps off the page in both your novels as well as your interviews for Retreat West.

If you’d like to read The Gospel According to Johnny Bender then you can get a copy here. Keep up to date with Dean and his writing on Twitter and his website.

What do you think about the themes of history repeating itself on a personal and political level? Are we always doomed to relive the same mistakes from the past over and over or can we break the cycles? Let’s talk!