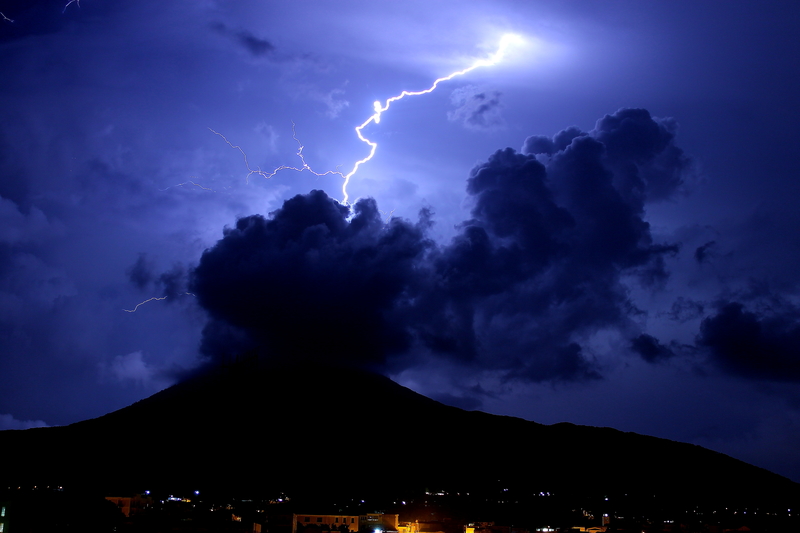 The archaeologist’s trowel scrapes and her brow sweats under an autumn sun as she dislodges pieces of a child that wasn’t. Segregating phalanges no bigger around than a fat needle, she reassembles tiny hands next to the mother’s pelvic girdle. It is smooth, unpitted by the trauma of birth, bleached by centuries. When she’s finished, nine partial fingers, one for each month, lie in the dust of this house that is not a house anymore.

Five miles to her east is a volcano that nurses scheduled fire.

Her own hands, bones still hidden by flesh, absently move to her stomach. She keeps her palms flat, then curls them as a newborn might do slumbering in a womb, or a young woman grasping for air while ash the color of snow rains down around her, or an archaeologist stretched on a sterile paper cloth listening to a doctor’s tired voice instead of a miniature heartbeat.

Sometimes, she thinks of nature, how rife it is with ticking clocks.The archaeologist finds her finest brush and sets to work on the crib’s frame. She sweeps dirt from each curved runner, wondering if someone had painted the crib, wondering if the mother that wasn’t might have sat by it at night, rocking an invisible infant to sleep with song. Practicing. Women do that sort of thing.

The earth shivers and she thinks of the vulcanologist who was once a husband but never a father, and of the warnings he sent, telling of disturbed rumblings inside the mountain to the east. He is both skilled and lousy at timing natural events, and today the archaeologist decides to ignore him. This is a thing she should have done in several prior situations that were less deadly, but more soul-killing.

When evening falls (it will fall tonight, hard and fast and forever) and Vesuvius starts to growl with the strain of advanced labor, the archaeologist crouches in the dark, humming a Roman lullaby. She prefers Aut dormi, aut lacte to Either sleep, or suckle because there is less pain in the age and foreignness of Latin. Still, other collections of sounds grind their way through her like a trowel through ancient soil: barren, sterile, unfruitful in the past, possible IVF candidate today. The color of the words has changed over centuries, but they’re all shades of the same blank hue.

Before the archaeologist is buried with the mother who wasn’t a mother, the baby who wasn’t a baby, and the peace of absolute stillness, she watches the muscles in her own hands flex with every movement of the unused crib. It is white like old bones, and it still rocks after all this time.

About the author: Christina Dalcher is a theoretical linguist from the Land of Styron and Barbecue, where she writes, teaches, and channels Shirley Jackson. Recognitions include The Bath Flash Award’s Short List; nominations for The Pushcart Prize, Best of the Net and Best Small Fictions; and Mslexia’s Novel Competition Long List. Find her work in Split Lip Magazine, Whiskey Paper, and New South Journal, among others. Laura Bradford of Bradford Literary Agency represents Christina’s novels. www.christinadalcher.com  and you can find her on Twitter: @CVDalcher.

If you enjoyed this story, please do let the author know with a comment below.