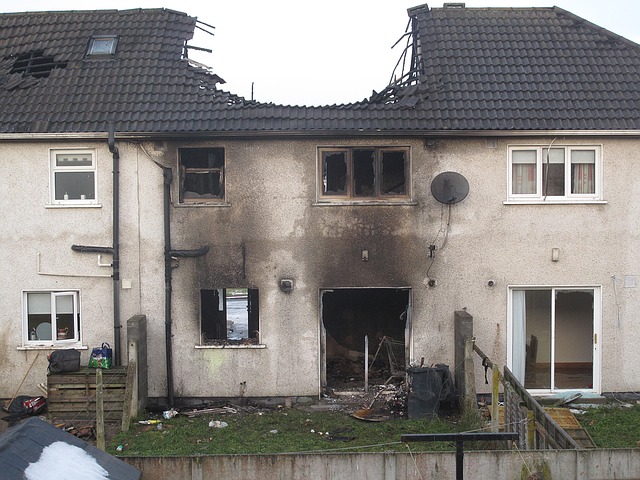 A Fire In Drimnagh

The house is wrapped in police tape. The attic where the fire started is burnt out and exposed, still faintly smoking. The doorway hangs wide open like a dead mouth.

I follow the smears of sooty black running across the brickwork. The same ran up the edges of Finn’s face where the nurses were yet to clean. He looked so much like a child tonight I cried in front of everybody. He looked empty, as if the life had already vacated his body.

I wanted to touch him but the nurses told me not to. It was the closest I’d been to him in a year.

When his mother left, I taught him to blame me. I encouraged him to hate me, and as soon as he turned sixteen he ran from me as I knew he would. I assumed his friends would kick him out eventually. He must have proved tougher than I’d given him credit for.

They never understood why I kept coming, even after they first surrounded me on the front porch and showed me the knives. Some were nearer my age than his – some had sons of their own. But they’d already become his family. Whatever they did together was between themselves. The police told me they were building a case. I couldn’t picture it.

When I saw Finn with his friends, on the front steps of the house or sat in one of their cars on the main road, he looked away. His clothes, his walk, the expression on his face – everything about him changed. He became unreachable, unrecognisable. I tried my best to watch him from a distance but it was impossible. He became another person – a grown man I’d never met.

When I finally got him alone behind the off-licence I couldn’t help but beg. He looked skinny and tired. He spat in my face. He ran from me again, desperately this time, fighting back the tears. I called his name but he didn’t turn. That was the last time I saw him until tonight.

In the doorway I can see the broken teeth of the stairs. Above, the windows are black and empty. People stop to take photos and then move on.

It feels wrong, but I’m proud to see it like this, knowing that my son will never go back inside. I hated this house and every part of it. There are houses like this all over Drimnagh. Young, scared boys walk into them and bitter men walk out. But now there is one less house.

A crowd has gathered. Someone asks me if I know what happened. I tell them no. Any of these kids could’ve done it, or know whose fault it was. I breathe deeply. My son could’ve died. But truthfully, without guilt, I’m glad to see it smouldering.

When Finn opened his eyes, I was the first thing he saw. In a few days, I’ll be taking him home.

About the author: Joe Bedford is a writer from Doncaster, UK. His short stories have been widely published, and are available to read at joebedford.co.uk. He has been Highly Commended for both the Manchester Fiction Prize and the Hastings LitFest short story prize, and won Waterstones Write & Raise prize in 2019.

One thought on “A Fire In Drimnagh by Joe Bedford”