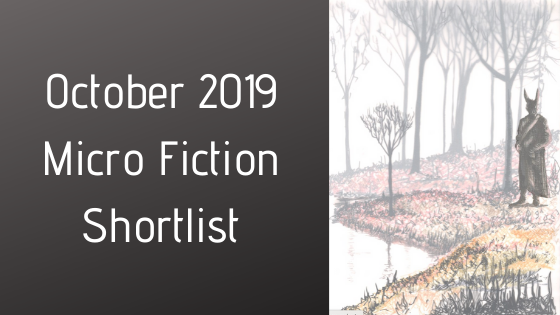 Thanks to everyone who took part in the latest comp to write a story inspired by Retreat West Books author, Sophie Jonas-Hill’s beautiful artwork. Lots of great stories have been read to get to our shortlist of 10 stories shown below. Congratulations to everyone who’s made it through to the final round of judging and to all the writers who made the longlist.

Voting is anonymous so if your story is on this page please don’t tell anyone what it’s called!

His world, engulfed in ash and cinder. Strange how in the fire and heat there’s more smoke than flame, more darkness than glow. He stands there in tatters, a rabbit carcass on his head like some kind of wild and primitive king. He’d just shaved yesterday and not thought to take a hat. The burnt patch on his head is aching now.

Looking out across the dam, he glimpses a small green shoot sheltered under a rock beside the water. One life untouched, in all this chaos. He imagines its tiny roots desperately clinging to the earth. He walks on.

She returns home from university, unexpected and tearful. Her parents make tea and help her unpack.

You kept my picture up, she says.

A picture above the bed, painted in art college. She can see the figure again – the trees forming its shape, dark to match her mood, visible only to her.

Her parents always threatened to take the picture down. They believed it to be harmful, stifling her recovery.

Well, they say, I guess sometimes it’s OK to change your mind.

They hug with brave smiles, and when she looks again at the painting the figure has gone.

In my dreams you stand tall, upright and proud. All around are spikes of grass, trees, reflections; pushing up to the sky, fracturing into water. A jagged world.

You used to tell me tales of a chimerical creature that was half-rabbit, half-human. It stalked my sleep until I was old enough to understand that it was just a story. Such creatures don’t exist.

Now, clearing your house, I find a head, fur-covered, rigid, ears long and stiff, and wonder: why would you have this?

At night I wake shaking, forgotten nightmares gripping me tight. Questioning my memories, fearing the truth.

In Search of Alice

She’s not here. I thought, hoped, she’d be here. Dormouse said she wouldn’t come. They all said it was madness to expect her.

I stand still, ears forward, listening for her gentle laugh. Staring at the skeletal trees around me as they search for the sun. Their wasted limbs stretching upwards out of the gloom. Chasing a warmth that is only a memory. I look down at where the rabbit hole

should be. Long since collapsed. The persistent drizzle filling it in.

Memories slip silently into the fog.

They came from the woods, the meadows, the railway embankments. Thousands of thrumming feet, pulsing hearts, twitching noses. Over the fields – what was left of them – toward town.

They would finish before the sun melted into the horizon: reclaim the land, ruined from over-farming, over-housing, overuse, overabuse. They would devour crops, dig up gardens, slink through cat flaps, draw blood.

A canine. It gave chase but skittered to a stop when a forest of ears rose up. Seconds later it ran fast and far, ignoring its master’s whistle. The human shrugged and headed to its bricked-up burrow.

‘I’m sorry. Do you mind?’ White Rabbit twitched his cigarette towards the officer with a yellowed paw.

She placed one hand on his sleeve. ‘Go on.’

‘Don’t believe Alice’s stories.’ He took a long, deep drag as his gaze darted across the glass-like waters. ‘I’ve still got the watch, look, and I was running late, but that’s where the truth ends.’

‘And the Queen of Hearts?’ she asked again gently, handcuffs ready.

His paw trembled, dusting his jacket with ash. ‘She was a lovely woman. Just lovely.’

He retrieved the evidence from his bag. A rose, painted red. Blood red.

The Fate of Small Creatures

You were huge-brained humongous with massive potential, striding like giants regardless of small things.

We darkened. We sharpened. We hardened, grew larger, swelled by your ruins, your wastelands your twilight.

The new tree by the lake is growing fast. No-one else notices it. They walk around the water, skim stones, feed the ducks or leave carrots for the Lepus who protects the wood.

Following Tuesday I found saplings where the fruit had rotted. I pulled them up, burnt every branch and root. I had to protect the wood, and us. The Lepus hadn’t come.

She knew of a method, she said, to turn mermaid, she said; a place in the woods, a copper bath, in the midday sun of All Saints Day, she said, and she invoked the I’d do anything for you, babe promise – something I’d said, repeatedly.

So, for once, we had a sober Halloween and we hired a van, drove through dawn, and set up in Wych Elm Wood. This is it, she said, heat up the water, she said, I love you, she said, while she wriggled her toes in the carpet of leaves and muttered her goodbyes to them.

When the Party’s Over

You say you love me.

It was my birthday.

Invited you to my animal print party.

We met at a masquerade ball; you gave me kisses and your mask.

Took a while, but I unpicked the gauze and sequins. Stitch by stitch.

Don’t show up now in your new costume.

Touching me. Following me.

Brandishing a limp flower under the darkening sun.

I won’t laugh this time.

Your superhero clothes and funny sky-high ears won’t beguile me.

If you have any problems using the survey shown below, you can cast your vote via this link instead: